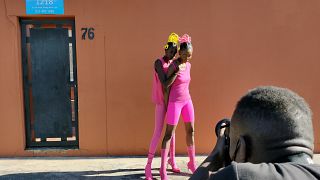 “Photography for me is a form of expression. But it’s also very much political,” says Black South African artist Jamal Nxedlana, as he dissects his passion for pictures.

“I was born in apartheid. In my early years, I was living in a very different South Africa to now and a time when Black South Africans didn’t have as much access,” he explains. “So, for me, this idea of picking up the camera and owning the production process of the images was very political.”

A graduate in fashion design, Jamal’s photographic style is rooted in Afro-surrealism, described as consciously creating “an alternative image repertoire to the repetition of colonial views of Africa.”

Born and raised in Durban before moving to Johannesburg, the 37-year-old’s work often plays “between the staged and not-staged, the real and the fake, the manipulated and unmanipulated.”

Jamal is currently showing a selection of his photography at London’s Saatchi Gallery, as part of an exhibition called The New Black Vanguard: Photography between Art and Fashion.

It features the work of 15 international Black photographers and celebrates creativity both in front of and behind the camera. Works include Black stylists, models, make-up artists and creative directors.

“I wanted to speak about how dynamic this group of people was, especially because they were being overlooked by the mainstream media because they were working in non-traditional ways,” he explains. “Their work didn’t fit very easily into boxes and existing frameworks. For us, it was about spotlighting these people, telling their stories.”

One of those featured was Bee Diamondhead, an independent stylist and creative director based in Johannesburg, whose image is among those being exhibited in London.

“Visually with this work, I wanted to reflect South Africa and, more specifically, the community that I am a part of. We value freedom of expression, cooperation and collaboration,” says Jamal.

“If you look at the hair, it draws from traditional African braided styles, but they’ve been rendered in a more like cyber way. I’ve also been very interested in cyber punk. So, you can see the two worlds colliding, this like past and present. Cyber punk is also linked to technological cultures. There are all these things coming in.”

Beyond the hair, Jamal styled Bee Diamondhead in clothing which carries a subliminal political message.

“The orange Armani jacket was thrifted from what we call piles,” he explains, referring to bails of unwanted clothing making their way to Africa from other parts of the world.

“A lot of the clothing is donated from Europe, America and Canada, essentially from the West. For me, they’re being dumped here essentially, it’s waste. So, using this clothing, also speaks to some of those politics and some of the relationships that we have with the West. But also, how we can take these things and create beautiful things out of them.”

The New Black Vanguard exhibition, created by American writer and critic Antwaun Sargent, is billed as fusing the genres of art and fashion photography “in ways that break down long-established boundaries.”

“This exhibition is an exploration of this generation’s Black image makers, who are bringing fresh perspective to photography. Image by image, they have created a loose global network around their art that powerfully centres identity, community and desire,” explains Sargent.

“In South Africa, when I look at contemporary culture now, it’s a very nuanced landscape in terms of how black people are represented photographically,” adds Jamal.

“Part of that is due to the number of Black people who are making images at this moment. We’ve really been able to create a much more balanced visual landscape.”

Looking to the future, Jamal defines himself as more of a “craftsperson” than an artist, pursuing what he describes as a “process” approach to his work.

“I thought identity was becoming a bit of a trap or like this box. There was this expectation that I would make this kind of work, being a Black person from South Africa,” he explains.

“So, the work I am now making is very much about process. The idea of not considering myself as an artist, but as a craftsperson. Like a painter, like an industrial designer that builds chairs.”

Jamal continues: “As I start to reflect on this, the themes of race and my positionality become apparent to me. Even though I set out to create work that’s not identity based or driven, my history and my past are still there.”

'The New Black Vanguard: Photography between Art and Fashion' runs at London’s Saatchi Gallery from 28 October 2022 to 22 January 2023.