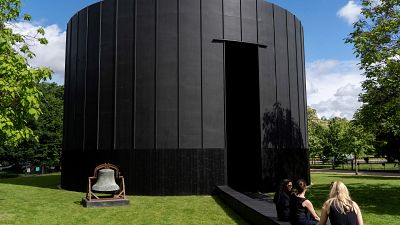 It was built by Adjaye Associates and designed by American artist Theaster Gates.

Gates was partially inspired by the kilns of Stoke-on-Trent, an English city known for its pottery and ceramics industry.

"It's a pavilion. It fulfils many different functions. It has a roof, so there's protection from the rain, it's actually interesting that here there is an Oculus (circular opening). So partially the rain will enter, but there is still a lot of protected space," says Hans Ulrich Obrist, Artistic director of The Serpentine.

A tribute to the designer's father

The spectacular design is dedicated to Gates' father who recently passed away.

"He dedicates this pavilion to the memory of his father and he wants there to be many memories also of sound, of course, sound is an archive and so there will be lots of voices filling the space over the summer. And we also have a bell actually in front of the pavilion," says Obrist.

This bronze bell was actually salvaged from a Catholic Church in Chicago - where Gates was born and still lives.

"I think the other elements such as the bell do add something because you think of that as a church, as the core, and I believe during events it will be rung to kind of summon people in. So it has that feel of a church. As for the paintings inside that's a more personal link to the artist's own life, which may be a little less accessible to those who don't know about the artist practice, but it's great to see the artist put his own stamp on the pavilion," says Tabish Khan, Art critic for The Londonist.

Visitors will be surprised by the sharp contrast between the outside and the inside of the pavilion.

"It's interesting that when you come up to it, it seems quite imposing because it's this large black monolith which stands out from the rest of the park. But then when you go inside, it's very reflective and calming because the sort of black just makes you kind of get into your own little world, and it means you can reflect and think by yourself," says Khan.

The artworks hung on the curved wall are made of tar, a liquid used to seal roofs - another tribute to the artist's father, who was a roofer by trade.

The 21st Serpentine Pavilion "Black Chapel" will be open to the public from 10 June until 16 October. Admission is free.