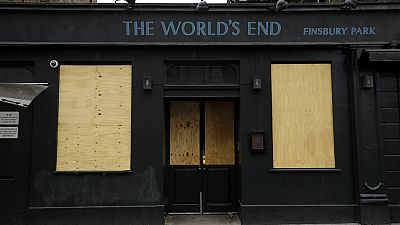 The World's End pub, which is a traditional place name for a boundary or the edge of an urban area, stands temporarily closed with boarded up windows due to Covid, 2020.   -   Copyright  Matt Dunham/Copyright 2020 The Associated Press. All rights reserved
By Joshua Askew  •  Updated: 21/09/2022

Three out of four night-time venues in the UK are teetering on the brink of financial ruin, a poll has found.

The flash poll by the Night Time Industries Association (NTIA), which represents some 1,400 bars, clubs and live music venues in the United Kingdom, revealed that three-quarters of late-night businesses are facing a "financial cliff edge."

In a press release, the NTIA said the finding "gives a clear indication of the current impact inflation has had on [the] night-time economy and hospitality businesses across the UK."

Inflation is currently at 9.9% in the UK. Last month it hit the highest rate ever recorded since the National Statistics series began in 1997.

Conducted between 16-18 September, the survey of more than 300 night-time businesses found that 47.7% of respondents were barely breaking even, while 24.8% said they were losing money.

40.6% of those surveyed said they would not last more than 2 to 3 months if cost levels continue.

The NTIA said the industry was "facing a perfect storm between untenable cost increases and consumer market constraints, where consumers have less disposable income."

"Businesses remain resilient but cannot hide the frustration and anger, as they face uncertainty once again, leaving many businesses, employees and freelancers on a financial cliff edge," it added.

According to the poll, 80.6% of businesses had seen footfall decrease, while 82% experienced a fall in revenue decrease over the last 3 months of trading

The findings come ahead of the UK government's mini budget on Friday in which it is tipped to set out policies aimed at curbing inflation and skyrocketing energy prices.

Michael Kill CEO of the NTIA urged the Conservative government to make "immediate and large scale interventions", saying the industry was at a "crisis point."

"With many business owners and operators emotionally and mentally drained from over 3 years of uncertainty, questions are quite rightly being asked of the government and its plans for the sector,” he said.

“Time is quickly running out, with hundreds of businesses already unable to hold on, making irreversible decisions about their future, with thousands of jobs lost or at risk.”

Kill called for a substantial cut to Value Added Tax (VAT), an extension of business rates relief and a meaningful energy price freeze for small and medium-sized businesses.

“On Friday we need a concise and detailed plan from the government on how they will support businesses through this crisis, nothing less than this is acceptable," he added.

Energy prices have soared 80% in the UK, with households and businesses now paying the second highest amount for their gas and electricity in Europe.

Lizz Truss's government has said it will provide "vulnerable sectors", such as hospitality, with more help to tackle rapidly rising energy bills and inflation, though it is yet to detail its plans.

Hospitality employs 2.53 million people in the UK, representing 7.1% of the country's total employment.

The beleaguered industry has been impacted in recent years by Covid and Brexit, though the exact impact of both is debated.

Debate: How Europe’s cost of living crisis affects you