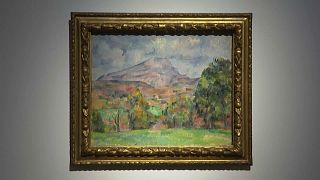 Mont Sainte-Victoire, Paul Cezanne's most famous landscape, could be yours for €120 million or more. The 19th-century painting is going up for sale next month at Christie's auction house in New York.

It's part of an art collection owned by the co-founder of Microsoft, the late Paul G. Allen.

He sought out some of the most valuable masterpieces in the world, including this $100 million pointillist painting of three nude models by French artist Georges Seurat.

"This sale is a once in a lifetime. It's, by value, the greatest auction ever put on. In terms of the range and quality of the masterpieces, it's the greatest ever put on," said Max Carter, Vice Chairman of 20th and 21st Century Art for Christie's in America.

"It's from late 15th century Botticelli through Lucien Freud's greatest painting from the 1980s, through paintings painted in the 2010s and everything in between."

The proceeds from the sale will be donated to philanthropic causes. During his lifetime, Paul Allen donated more than €2.65 billion.

He died in 2018 and his estate continues to support a number of causes that were close to his heart.

In total, more than 150 artworks will be sold at auction. The Cezanne has the highest valuation of all lots in the sale.

But Christie's says the €120 million price tag reflects just how important this painting is in the French artist's career.

"So, there's not just one highlight of this collection, there are a dozen truly generational defining masterpieces. But this Cezanne is literally at the summit of Cezanne's output," said Carter.

"The Mont Sainte-Victoire, which is in Aix in the south of France, was his signature subject. He painted eight of these paintings in the 1880s. In the first four, the perspective is from further off, and the latter four are, closer up. This is the closest up of them and is not obscured by a tree. And this you get the purity of Cezanne's architecture as you do in few other paintings."

Carter also expects the collection to appeal to a wide range of potential buyers.

The collection is currently touring as an exhibit. It has already visited Hong Kong, Los Angeles, Taipei and Shanghai. After its display in London, it will head for Paris before its final stop in New York.

Christie's says it's generating so much interest they expect to top the already sky-high total sale estimate of one billion dollars.

The artworks will be sold across two live auctions at Christie's Rockefeller Center in New York. The first will take place on the evening of November 9 and the second in the morning on November 10.

Wealthy collectors spend more than ever on art amid economic crisis

Wikipedia creator's computer and NFT up for auction at Christie's