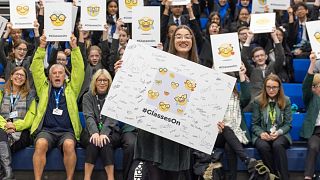 British schoolgirl Lowri Moore is just 13 but has achieved a lot in her short life.

In 2019, at just nine years old, she persuaded Disney to create a bespectacled heroine for the first time, in the hit film Encanto (2021).

She is now setting her sights on a brand new campaign called #GlassesOn, which has struck a chord with thousands of young people around the world.

Lowri is urging the body responsible for all new emojis to give people the option to put glasses on them, in the hopes that it will make young people feel more confident.

She argues many children still resist wearing their glasses for fear of appearing "different or uncool".

"People who wear glasses are not nerds"

Lowri's latest campaign was sparked when her mother Cyrilyn tried to find an emoji relevant to her daughter.

"She was looking for an emoji that would represent me but all she found was a nerd," explained Lowri.

"She kept on looking and there was a granny and a teacher but obviously that doesn't represent me," she said.

13-year old Lowri said it was great there were some bespectacled emojis, but three was not enough.

"It's not really positive so we're just asking for the option of putting glasses onto already existing emojis," she said after handing in copies of her letter at the London offices of tech giants Google and Meta.

Lowri's campaigning began in 2019 when she wrote to Disney calling for more characters with glasses in their films.

Director Jared Bush revealed he had been inspired by the schoolgirl's letter, telling her: "I am your biggest fan, I'm so impressed by you."

The director also said he had wanted to let her know much earlier, but had to keep it secret until the movie was in the bag.

In her latest letter, Lowri praised the Unicode Consortium, the non-profit organisation based in California that oversees new emojis, for offering users more choice.

But she urged them to go further.

"I'd love to see the option to add glasses to face emojis, similar to changing skin colour or hair colour as you have already made available," she wrote.

Having the current "nerd" emoji as the only one available for young people could be "damaging as it helps to confirm the negative stereotype and stigma that we are trying hard to destroy", she added.

Lowri's campaigning success was recognised earlier this year when she was named "Campaigner of the Year" by the International Agency for the Prevention of Blindness (IAPB).

"The Emoji Movie": Text message film is trashed by critics