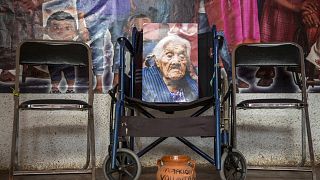 The Mexican family of the "real-life Mama Coco" are showing their respects to the late grandmother on the Day of the Dead   -   Copyright  Enrique Castro/AFP
By Theo Farrant  & AFP  •  Updated: 02/11/2022

In the town of Santa Fe de la Laguna in Mexico, tourists from all across the world and Pixar fans alike gather during the Day of the Dead festivities to visit the home of the "real Mamá Coco", the ficitional character from the beloved 2017 Pixar film Coco.

Coco told the story of a 12-year-old Mexican boy named Miguel who journeys to the Land of the Dead to meet his deceased great-great-grandfather.

Maria Salud Ramirez became a viral sensation after the film released for her striking resemblance to the character, with her good-natured smile, squinting eyes and braided white hair.

While Ramirez died on 16 October earlier this year, aged 109, her home is still a popular spot for tourists, and she is remembered as being an independent and talkative woman who regularly visited the town square in Santa Fe de la Laguna.

Was the character of Mamá Coco inspired by Maria Salud Ramirez?

Pixar has always denied that Coco's loveable abuela was based on anyone in real life and said that it was a product of its creators' imagination.

However the Ramirez family have claimed that a Pixar team met with Maria Salud and photographed her.

"It was based on her, on her image," says Patricia Perez, 38, one of Maria Salud's granddaughters.

Many of the tourists agree.

"It looks a lot like her! When you look at the nose in the drawing and hers, the shape of the face and the hair, or the wheelchair, it's too much of a coincidence," said Spanish tourist Paula Colmenero, 52.

However, Perez said she no longer wants to "get involved in that controversy,"  as the movie has transformed the Ramirez family's life.

Celebrating Mama Salud on the Day of the Dead

As in the film's final sequence, this year Mama Salud is only present in the photographs placed by the family on her wheelchair and the altar that they have prepared to receive her spirit on the Day of the Dead.

The Day of the Dead (el Día de los Muertos) runs from 31 October to 2 November and is a national holiday that involves family and friends gathering to pay respects to loved ones who have died.

Adorned with marigolds and candles, Maria Salud's family will lay out her favourite dinner - fish, beans, tortillas and a Pepsi to drink.

Allowing visitors to continue to visit her home after her death is what Mama Salud would have wanted, said Perez.

"She always wanted to receive people. She was always happy. That's why we decided to keep the doors open," she said.

It made the long journey worth it for 36-year-old South Korean tourist Taehyun Kim, who said "Coco" was one of his favorite movies.

Which celebrity costume slayed for Halloween 2022?