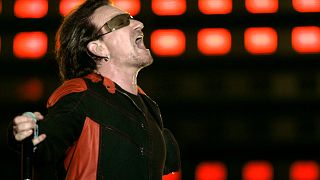 U2 frontman, Bono, has released his first book, a memoir traced through his eclectic discography.

Through ‘Sunday Bloody Sunday,’ ‘Where the Streets Have No Name’ and other U2 classics, he traces his biography from his stifling childhood home in Dublin and the grief over the early death of his mother Iris Hewson, to the formation of the band that made him a global celebrity, and his enduring marriage to Alison Stewart.

Bono opened his book tour with typical brash fashion, taking to the stage at Manhattan's Beacon Theatre with three musicians - not U2 members - to perform.

Among renditions of classic songs, including an in Italian performance of ‘Torna a Surriento’, Bono told his audience some of his favourite stories from his eventful life.

In the audience were megastars, from former President Bill Clinton, actor Tom Hanks, to his own bandmate, guitarist The Edge.

The book deals with the loss of Bono’s mother as a child, the loss of his father as an adult, his discovery of his cousin as his half-brother, and various controversies he’s dealt with.

He told some fascinating stories during the evening. Here are some of the best, as well as some other big reveals from the Irishman frontman’s new biography.

Bono recalled phone calls with Luciano Pavarotti and his pleas of “Bono, Bono, Bono” as the opera star recruited him to perform at a benefit show in Modena, Italy, and once turned up at U2's studio on short notice - with a film crew.

Bono also re-enacted his many tense bar room meetings with his father, who seemed to regard his son's career as some kind of failed business venture. Brendan Robert Hewson's rough facade did collapse once, unexpectedly - when he met Princess Diana, an encounter Bono described as like watching centuries of Irish loathing of the royals “gone in eight seconds.”

“One princess, and we're even,” Bono added.

Bono spends a lot of the book fawning over his friendships with U2 bandmates, Adam Clayton, David "The Edge" Evans and Larry Mullen Jr.

But some of the most interesting revelations come from his admitted adoration of the musicians behind other massive acts.

One of the biggest influences comes from fellow 80s rockers, R.E.M. “Michael Stipe’s lyrics changed the way we see America. He also has one of the great voices of any geography,” Bono writes in the chapter for ‘Invisible’.

Later he recalls how Mullen and Clayton from U2 joined forces with R.E.M.’s Stipe and Mike Mills to form to play U2 song ‘One’ at a 1993 MTV Rock the Vote inauguration event for then-President Bill Clinton.

Bono also delves into the reason he fell out with INXS singer Michael Hutchence. Bono and his wife were friends with Hutchence and his partner Paula Yates in the early 90s.

But the friendship wasn’t to last as Hutchence’s addiction issues drove a rift between the pairs.

He writes that he and his wife were uncomfortable after they met with Hutchence and Yates who had “spiralled down the vortex of a recreational drug use that had become hard work for everyone, especially their family, especially the younger ones.”

Following that, Bono and Ali refused the couple’s request to be godparent to their newborn daughter in 1996, severing the friendship.

“Neither of us dreamed they'd both end up dead so soon. Even now, I can't believe I've just written that,” Bono writes recalling the tragic loss.

The song ‘Stuck in a Moment’ was written by Bono in tribute to Hutchence.

In an interview to promote the book, Bono revealed details of a time he got drunk with President Barack Obama in the White House.

Ali and Bono were visiting the then-president when Obama started serving some strong cocktails. He said that while Obama “doesn’t have too many, he’s very measured,” Bono’s allergy to the salicylates in red wine often causes him to fall asleep unexpectedly.

Obama and Ali went on the hunt for Bono, eventually realising he was in Abraham Lincoln’s bedroom.

“And there I was in Lincoln’s bedroom, asleep, fallen asleep in the bosom of Abraham himself,” Bono says. “He just woke me up and laughed. President laughed his head off.”

“But he does tell people that he drinks me under the table, he doesn’t believe the allergy thing,” Bono notes.

U2 hit the road with their classic album 'The Joshua Tree'