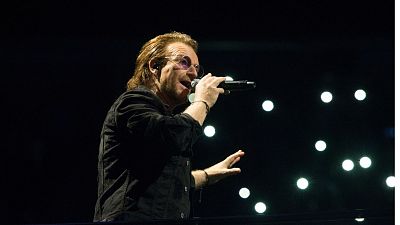 U2 frontman Bono says he feels "embarrassed" by the sound of his early singing voice.

The 61-year-old – real name Paul Hewson – has opened up about not liking his singing voice in the early days of U2.

During an interview for The Hollywood Reporter's Awards Chatter podcast with fellow bandmate The Edge, the performer shared that he feels "embarrassed" by the sound of his early singing voice.

"I've been in the car when one of our songs has come on the radio and I've been the colour of, as we say in Dublin, scarlet," the 61-year-old musician recalled. "I'm just so embarrassed."

A 'very strange and not macho' singing style

The 'Sunday Bloody Sunday' hitmaker specifically mentioned the group's 1980 debut album, Boy, which he said had "unique and original material," but lacked detail.

Despite this, the Irish quartet have since released 14 studio albums and sold 150 million records worldwide.

Bono explained that the rock band – established in 1976 – "sounded incredible" at the time, but he is not a fan of his vocal style.

"I find the voice very strange and not macho," he continued. "And my Irish macho was kind of strained by that."

He insisted that he had only become a real "singer" in recent years, as the band did not know much about music theory when they began playing together in Dublin.

"I was singing out of my body because I wasn't thinking about singing. That's the thing: We didn't know a lot about music. We were making it up," he concluded. "When you don't have music theory at that level, you write your own."