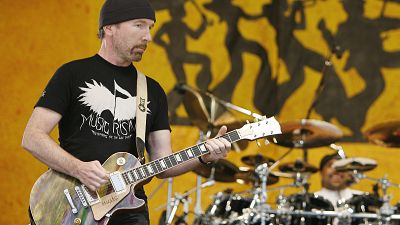 U2's Guitarist, Edge, is selling off rock memorabilia to help musicians struggling to perform due to the pandemic.

The star’s charity, Music Rising, will sell off famous guitars and other collectibles at an auction in December to raise money for artists local to New Orleans.

The auction will feature guitars donated by Slash, Lou Reed, Steve Miller, and a bass from Paul McCartney.

Music Rising was set up by Edge and producer Bob Ezrin in 2005 in the aftermath of Hurricane Katrina to replace instruments lost due to the flood. They have found a new mission in the wake of the COVID-19 pandemic; reinvigorating the city’s live music scene.

"It's suffered a kind of major setback,” Edge told the Associated Press.

“Back in post-Katrina, we were replacing instruments. Now we're not being that specific. We're actually willing to just fund people's livelihoods."

Two of Edge's guitars, played extensively on tour with U2, will be among those sold; including the instrument he calls the "One."

"It's a beautiful Les Paul and it's actually a Music Rising Les Paul, part of ... a limited edition of 300."

The other is a custom-designed Fender Stratocaster used while on tour to perform "Bad" and "Still Haven't Found I'm Looking For."

"They are real serious guitars that I've spent a lot of time playing and they'll — they'll be missed," he adds.

Are U2 going back on tour?

Edge is firm that, although he’s following in Bono’s charitable footsteps, U2 are not going back on the road. The guitarist says he is focusing on songwriting and composition for now.

“I am suffering a little from survivor's guilt because, you know, we didn't have to cancel tours," he said.

"We didn't have anything public that we were planning for this period. And it just forced me to be at home working on new songs, which is exactly what I needed to do."

Edge differs from musicians like Van Morrison, who object to venues requiring vaccine passports, saying his priority is the safety of fans.

"There's no question in my mind that that's how, how we should deal with this. And I just fail to see any logic to not supporting the whole idea of vaccinations."

Some of the offerings are currently on display at Van Eaton Galleries in the Sherman Oaks neighborhood of Los Angeles.