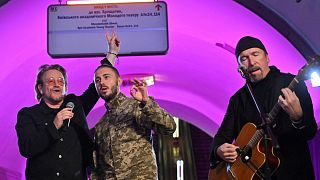 Irish rock star Bono praised Ukraine's fight for "freedom" during a performance at a central Kyiv metro station on Sunday, where the U2 frontman also delivered his own "peace" prayer.

From the platform of a Kyiv metro station, the 61-year-old rock icon sang the U2 classics "Sunday Bloody Sunday", "Desire" and "With or without you".

"People in Ukraine are not only fighting for your own freedom, you are fighting for all of us who love freedom," Bono said during a break.

The band's Twitter account said Bono and bandmate 'The Edge' were invited to Kyiv by President Zelenskyy to perform "as a show of solidarity with the Ukrainian people."

The singer also referred to past conflicts in the band's native Ireland and its troubles with a more powerful neighbour.

"We pray that you will soon be able to enjoy some of that peace," Bono said.

The surprise appearance by Bono -- a longtime humanitarian activist who frequently lends his voice to a variety of causes, including the fight against poverty and AIDS -- came as air raid sirens sounded in the Ukrainian capital and fighting raged in the country's east.

At one point, Bono invited Taras Topolia, the lead singer of the Ukrainian band Antytila -- and also a soldier -- to sing with him, and called on the world to support the war-torn country with a rendition of "Stand by me".

Watch this Euronews video about Antytila, and their involvement with the war effort in Ukraine:

This is Mexican tiger fighting: a brutal indigenous rain ritual