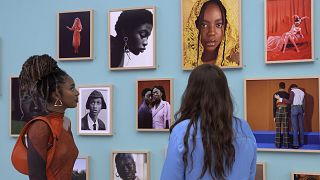 In London’s Saatchi Gallery, a new photography exhibition is celebrating Black creativity both in front of and behind the camera.

Image-makers on the pulse of change

“The exhibition features contemporary images by Black designers who are working from Los Angeles to London to Lagos to New York," says exhibition curator Antwaun Sargent. "The image-makers really sort of bring their own perspective and aesthetics. It’s about how the history and the culture has changed, and I think these image-makers are on the pulse of that change.”

A photograph by 29-year-old Mahaneela, a photographer and filmmaker from London, captures a South African DJ. Her mother comes from India, her father from Ghana.

“The image is called ‘In Ochre’ and I really hope that people just take a feeling of joy and happiness from it," says Mahaneela. "I document Black and Brown people in the colour yellow, orange and brown across the Ochre spectrum. I create my images that should feel joyful to kind of combat the other narratives that surround people from those communities.”

UK artist Campbell Addy also has his work on show, including an image that came about after he learned about Ignatius Sancho who, in the 1700s, was born on a slave ship in the Atlantic and ended up in Britain.

I was like, wait, my experience of Blackness in this country was purely slavery and at the same time this man was doing this. So, I wanted to create an image that encapsulated my feelings.

“He was the black first man to be able to vote and own property in England and he was part of a group of poets and creators and he owned a store," says Campbell.

“And I was like, wait, my experience of Blackness in this country was purely slavery and at the same time this man was doing this. So, I wanted to create an image that encapsulated my feelings.

The work of fifteen international Black photographers is on show in all.

The images, it’s hoped, will spark conversations… around the notions of race, beauty, gender and power.

“It’s incredibly important to showcase this exhibition that celebrates Black identity," says Laura Uccello, Director of Partnerships at the Saatchi Gallery. "Because it gives you an idea of Blackness worldwide, but it also gives a platform for British photographers.”

The New Black Vanguard: Photography between Art and Fashion runs at London’s Saatchi Gallery until the 22nd of January.

Interview: Stephen Tayo's depiction of the "broken English" of Lagos