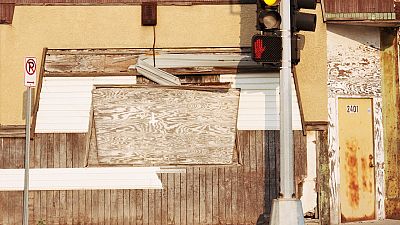 “I’m talking about the commodification of race, like race as this thing that has been used to determine value.”

Zora J Murff’s thought-provoking photographic work, which tackles Black representation in the US, has just gone on show at London’s Saatchi Gallery.

“There are specific things, ways that Blackness is trying to be eradicated or erased in American society. The sort of trajectory that we’ve been on since people decided that they were going to enslave Black people.”

Murff, 34, is one of 40 leading US photographers exhibiting at Saatchi, as part of its new ‘America in Crisis’ exhibition.

The show is born out of a 1960s photography concept of the same name, which explored the American Dream versus reality at a time of great change and division: the run-up to the election of Richard Nixon as president.

Five decades on, photos from back then are juxtaposed with recent images, creating a contemporary dialogue between the two.

The battle for equality is one of the deeply rooted national debates explored within the exhibition, alongside gun control and topics such as the climate crisis and digital revolution.

“What I felt about the perpetration of American anti-Black violence in 2020 was no different from how I felt about it before, and my opinions remain unchanged,” says Murff.

“The recorded deaths of Black people at the hands of white people that we have seen these last two years are nothing new in this country. Such recordings continue to serve as spectacles for consumption in the court of public opinion while the conditions under which Black people suffer remain unchanged.”

The ‘America in Crisis’ exhibition features a body of Murff’s work, described as considering how generations of injustice and racist civic policies have shaped infrastructure and daily life in the historically Black neighbourhood of North Omaha in Nebraska.

He brings together portraits and photographs of the built environment, along with archive images to highlight the experiences of this community in middle America.

Murff is currently a professor of photography at the University of Arkansas. With a degree in psychology, he started out in social work before becoming an artist and teacher.

“I teach students about imagery as a way of learning things about themselves and how they relate to the world,” he says.

Murff understands photography as an “inherently social act” and uses it to “undermine systemic racism by encouraging a deeper reading of images and the contexts that surround them.”

“I think that I’m making as a person who is racialised as Black,” he highlights. “Then I feel like I’m talking about existential notions of that, based on making work about my own lived experiences.

“For me, it’s finding a way to understand these things for myself. So, I know how to navigate the world for me."

A sense of belonging

One of the images Murff is showing at the Saatchi Gallery is entitled ‘Flagging.’ It shows an American flag on the front porch of a house, obscured by hedgerow foliage in front of the lens.

“I made it a time when I was thinking deeply about what it means for me to claim myself as an American and really this kind of searching for, like what is a space for me. How do I make a space that’s essentially for me,” recalls Murff.

“I feel like that image touches on that feeling, to have that desire to feel, knowing that I belong here but always having that struggle with society, these ways that question my existence here.

“And so that image is, in a way, me talking about that feeling, that distance. Thinking about being able to see something, to see that it’s attainable, it’s tangible. But then have all this sort of noise, where the message becomes less clear or comes in and out.”

Murff doesn’t have one key takeaway for those viewing his work in London. Rather, he hopes that people will draw something out of it for themselves.

“It might make people feel uncomfortable because they don’t understand, they’re not clued into the things that I’m saying,” he says.

“There are people who will come to it, who will understand it, and can use it as a way of just feeling acknowledged and commiserating with me.”

**‘America in Crisis,’ organised by the Saatchi Gallery, runs from 21 January to 3 April 2022. The exhibition is curated by: Sophie Wright, Gregory Harris from Atlanta’s High Museum of Art, and academic Tara Pixley.  **