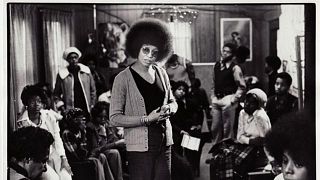 American activist and icon Angela Davis   -   Copyright  AP Photo
The opinions expressed in this article are those of the author and do not represent in any way the editorial position of Euronews.
By Jonny Walfisz  •  Updated: 19/10/2022

October is officially Black History Month in the UK. It’s an opportunity for people across the UK to consider and expand their knowledge of black history.

It’s especially important in the UK. Despite the role that Britain had in the global slave trade, the long history of black people living in the UK, and the enduring racial disparities in the country; black history is woefully lacking from school syllabuses.

In the UK, Black History Month was first celebrated in October 1987. Ghanaian analyst Akyaaba Addai-Sebo organised the first one as a set of lectures celebrating that would start an “annual celebration of the contributions of Africa, Africans and people of African descent to world civilization from antiquity to the present”.

Today, Black History Month has loads of exciting events pop up around the country. From food festivals in London, to music workshops and lectures in schools; people from all ages can expand their knowledge of Black history.

“Black people are often given the double burden of experiencing racism and discrimination, and then being expected to fix it,” explains Catherine Ross, editor of the Black History Month magazine.

“Hopefully, by making the theme of this year’s Black History Month magazine and website Time for Change: Action Not Words’ we can come together to make a change for the better,” she says.

The original Black History Month was in the US, which Addai-Sebo learnt about when visiting in the 70s. The practice has become popular throughout Europe as well.

The second European country to officially celebrate a Black History Month was Germany. The occasion was first observed in Berlin in 1990.

Also celebrating Black History Month in October is the Republic of Ireland. First celebrated in Cork in 2010, the location was particularly apt given Cork was a leading hub of the abolition movement in the 19th century.

This year’s theme is “Celebrating Black Excellence: Looking Back to Shape the Future”.

In the Netherlands, Black History Month is also celebrated in October. It’s called Black Achievement Month and is used as a chance for highlighting Black culture.

Events across theatre, dance, readings, and cinema are organised to celebrate the Black community and their influence on Dutch culture.

Black Achievement Month isn’t just limited to the Netherlands, with events also taking place in Suriname, an independent state that was once part of the Netherlands, and Curaçao, a member of the country’s dependencies.

In Belgium, Black History Month is held in March. Started by the student association African Youth Organisation in 2017, the event has been organised by a non-profit 'Our Stories Uncensored' since 2019.

The month is spent with multiple events celebrating Black history across the cities of Antwerp, Ghent, Brussels, Schaerbeek, Vilvoorde, Mechelen and Limburg.

Aside from some scattered events held informally in other countries, that’s pretty much it for Black History Months across Europe.

It’s a less than ideal situation given the contribution and presence of Black people throughout European culture and history.

This is a shame, considers Ojeaku Nwabuzo, Director of Policy, Advocacy, and Network Development at the European Network Against Racism (ENAR).

“The reason why Black History Month was initiated, was because of the institutional racism within the schools and within the curriculum, and the fact that either Black people's histories were omitted, or there was discriminatory racist stereotyping of Black people,” Nwabuzo says.

“That was done by the state. So it's really important that the state actually addresses that and supports it,” she adds.

While those measures have been most proactively taken in the US, Europe is lagging behind in recognising the histories of Black people in the continent.

If a country is to start recognising Black History Month, Nwabuzo points out that it’s important that it is community led, ideally with state funding, and doesn’t devolve into a corporate capitalist opportunity.

Black History Month is more than an opportunity to promote a Black film or product line, she argues. Instead, it is important for changing historic attitudes.

An ENAR report in 2014 found multiple examples of racist stereotypes persisting in Europe.

A chief example that is just a few months away from showing up again is the Dutch ‘Zwarte Piet’ tradition. In the Christmas season, many Dutch people dress in blackface to portray the character.

Many people in the Netherlands argue that the character is a tradition not directly associated with Black people. The Dutch and international Black community however recognise the Black Moorish origin of the character and the impact on racist stereotypes the character provokes.

In Germany, a debate in 2013 erupted over the use of the N-word in a children’s book. It was removed from children’s syllabuses, but the report noted that “a lot of racist stereotypes, especially when it comes to black people in the curriculum,” Nwabuzo says.

Nwabuzo believes recognising Black History Month is not just an opportunity to reflect on history, but to recognise Black liberation.

“Black History Month doesn’t have to be about just telling the story of the history of Black people. It can actually be a deeper reflection of Black liberation and struggle and what that has given the world,” she says.

“If you do that, it can be a really nice way to say that Black history should be part of the whole curriculum, but within this certain month we’re going to have a different angle, where we talk about what we’ve gained from Black liberation and celebration.”

The Woman King: if you see one movie this year, please make it this

US has 'a long way to go' on systemic racism, expert says