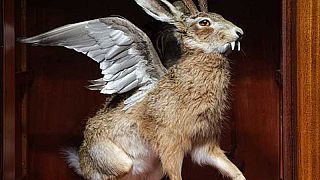 For Euronews Culture's countdown to Halloween, we’re taking a look at some of the lesser-known mythical creatures of Europe.

Today is the turn of Germany with the Wolpertinger.

This is not one of the most frightening mythical creatures on our list, especially compared with the Baba Yaga or trolls.

Picture a small mammal resembling a rabbit with antlers, wings and webbed feet who lives in the alpine forests of Bavaria and Baden-Württemberg.

Its myth reportedly dates back to the 1800s and has been a source of fun for taxidermists since.

Many believe its legend boils down to rabbits that were infected by the Shope papillomavirus – a disease that causes bony tumours to grow on their heads or bodies.

While you may not be quaking in your boots at the description of the Wolpertinger, the hybrid does have one nefarious purpose: tricking tourists into the woods so they get lost and starve.

But over the years, they’ve mostly been a tourist trap of another sort, as Bavarians have sold the stuffed and mounted creatures to tourists passing through, claiming they are part of the local wildlife.

So, beware the nipple-mesmerized hybrids and taxidermists eyeing up your wallet.

Join us tomorrow for our final mythical creature...

Watch: Salem in Massachusetts gears up for Halloween

Hisssssterical: An escaped king cobra returns to its Swedish home