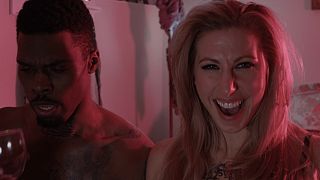 Our third short film of the week is Sell Your Body, by Jaanelle Yee.

Sell Your Body is a perfectly calibrated horror-comedy that follows a med school dropout wrestling with crippling student debt.

And let’s face facts – no Freddy, Michael or whoever’s Ghostface this time around can measure up to the terrifying threat of looming financial debt.

Thankfully, though, our protagonist has got a plan to make some fast cash: it involves a few right-swipes on a dating app and a portable container...

Written and directed by Jaanelle Yee, this societally relevant and millennial twist on a classic urban legend is disturbingly brilliant. It both addresses sexuality / hook-up culture in the dating app age and how predatory behaviour stemming from the exploitation of students can engender predatory behaviour within the dating scene... and more. To say more would be to spoil too much.

Both Yee and Nadira Foster-Williams (who plays our snack-packing narrator to perfection) strike a faultless tonal balance with their direction and performance. Understanding that the best laughs should have some darkness lurking beneath their surface, they oscillate between bursts of bleakness and laugh-out-loud funny beats, with no hint of tonal whiplash.

For instance, the spot-on delivery of the loaded line “They’ll be fine… I was fine” feels heavy and brings a new dimension to the character. But it is subsequently followed by two far-from-throwaway visual gags that’ll have you cackling up all over again.

To add to this perfect mix of horror and nervous laughter are some terrific fourth-wall breaks and knowing camera glances; these interactions with the audience are always sparingly used and establish a fascinating connection of solidarity with the heroine. They make Sell Your Body akin to Fleabag gone feral.

Enjoy, don't get too many ideas, and make sure to check out our ongoing daily selection of articles undercoveringthe mythical creatures of Europe, our second countdown to Halloween series which includes all you need to know about The Green Man, Baba Yaga and Trolls.