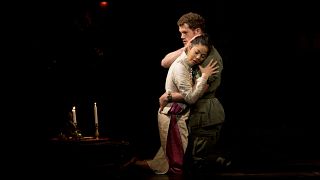 In 2018 as the sex scandal surrounding Harvey Weinstein hit the headlines and the #MeToo movement was emerging, Julia Effertz was at the Cannes Film Festival watching a panel on intimacy coordination.

“I was fascinated as an actor,” she says.

In Effertz’s experience when shooting love scenes directors relied on performers to draw on their private lives and just ‘go for it,’ something she felt increasingly uncomfortable with.

“When I’m acting in an intimate scene I don’t want to feel vulnerable or that parts of my private life are coming into play; this isn’t me it’s a character.”

Effertz was so intrigued by the talk that she went on to train as an intimacy coordinator, first in London and then California before landing in her native country of Germany.

“I started spreading the news in Germany. People said what are you talking about? This is ridiculous.

“Doors were slammed in my face.”

Now Effertz works in a very different landscape and has coordinated for Germany-based productions in Amazon and Netflix, but what does the actor, writer and now intimacy coordinator actually do?

Why are intimacy coordinators needed?

In August this year actor Sean Bean attracted controversy when he said in an interview that intimacy coordinators spoilt the ‘spontaneity’ of on-set sex scenes.

“It would inhibit me more because it’s drawing attention to things,” said Bean.

“Somebody saying, ‘Do this, put your hands there, while you touch his thing…

“I think the natural way lovers behave would be ruined by someone bringing it right down to a technical exercise.”

Bean was criticised by many fellow actors including his co-star in ‘Snowpiercer’ Lena Hall, whom Bean described in the same interview as “up for anything” due to her ‘cabaret background’. Hall is in fact a theatre actress who has starred in ‘Kinky Boots’ and ‘Hedwig’.

Bean’s assertion that spontaneity is key is challenged by Effertz who says that sex scenes should be as coordinated as a fight scene, with stunt choreography being something Bean would be intimately familiar with from Lord of the Rings.

“With violence we always knew we had to have someone who knew how to fake it for the camera so that’s why we always have stunt coordinators, that’s a standard,” says Effertz.

“It’s fake blood, you don’t see the actor break their nose or a leg - God forbid.

“For intimacy, historically it’s like we’re all adults here, you have a private life, you know how to kiss, you know how this whole sex thing goes so just go for it and we’ll let the cameras roll.”

Before arriving on set Effertz engages in lengthy discussion with directors to understand their creative vision but also with actors to establish their boundaries. She also collaborates with other departments like wardrobe to discuss methods for concealing nudity and goes over contracts to examine wording on nudity clauses.

“We put in a process that allows the actor to give consent enthusiastically,” she says.

What does an intimacy coordinator do?

According to Effertz intimacy coordinators are the ‘cousins’ of stunt choreographers and agreeing the technicalities of a scene is essential to ensure actors feel comfortable.

The choreography acts as an anchor; it tells the story and it’s repeatable. It ensures the actors know what story they’re telling and as a bonus means there are less editing problems.

“You rehearse how the character behaves; touches, moans, responds; that protects their private intimate self,” says Effertz.

“If you tell actors to just go for it and your co-star sticks their tongue in your mouth you’re thinking ok is this the private person - the actor - or the character?

“You design the intimacy and you rehearse it just like a fight. This process allows them to act very freely.”

Another big element of Effertz’s role is ensuring that actors are not taken advantage of or otherwise feel pressure to conform to expectations due to an inherent power imbalance on set.

In interviews many young actors have said that they either had regrets or would have done things differently if they had a do over on early-career parts. Kate Winslet said in an interview that she only went as far as she did in her famous nude scene in ‘Titanic’ because she “had things to prove”. Meanwhile Downton Abbey actress Jessica Brown-Findlay said that she believed a scene in ‘Albatross’ where she showed her breasts would be shot from behind and that at that stage of her career she didn’t know “What she could say no to”.

Only last year the British actor and director Noel Clarke was accused of pressuring an actress to appear topless in a sex scene, a claim he denies.

“I’ve had so many conversations where an actor or actress says to me ‘well Julia I’m not a prude but…’” says Effertz.

“That tells me there’s a pattern and a systemic problem and there’s pressure on the actor to be up for anything.”

How commonly are intimacy coordinators used?

During Effertz’s career the conversation has shifted from ‘why do I need an intimacy coordinator?’ to ‘how do I find one?’

After a slow start in her homeland, intimacy coordinators became more sought after following the high-profile prosecution of Harvey Weinstein.

“I thought it’s likely I’ll never work on a German set,” she says.

“Eventually radio stations contacted me when the Weinstein trial started. They were looking for someone to comment on this.

“A young director heard me on the radio and contacted me, that was my first professional gig.”

But while in the anglicised world the position has become standardised (the BBC has made it compulsory) there is still a long way to go.

“You can see this is becoming a topic in Germany but whether I’m welcomed with open arms that’s another story.

“I’ve declined projects where it’s very clear the director or company wants to tick a box.”

Despite some on-set horror stories Effertz has also had positive experiences with great directors and producers who were willing to take her role seriously. In the future she hopes that intimacy coordinators become the gold standard for every stage, film and TV production and that this will increase not only safety but quality.

“The more I do this job the more I’m aware that human intimacy is such a varied, complex part of how we express ourselves.

“I see too many cliches, too many scenes that haven’t been worked on properly and that’s a wasted opportunity of storytelling.”

Will #MeToo help us quit abusers? Weinstein's indictment is just the beginning | View