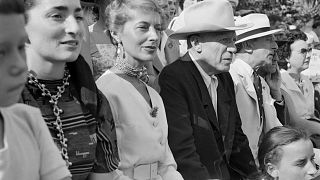 The #MeToo movement has made violence and sexist behaviour against women a societal issue that even Pablo Picasso, who died nearly 50 years ago, seems unable to escape. A reality that not only museums but also the Spanish artist's own grandson, Olivier, wants to address.

Since the 1980s, several controversial works have painted negative portraits of the idol of modern art, whose work has been inspired and enhanced by his relationships with the many women in his life.

The latter devoted two books to the painter to "set the record straight".

"We realise each time that after having exhausted his inspiration, he moves on to something else", says Olivier, the son of Maya Widmaier-Picasso (born of the Spanish artist's union with Marie-Thérèse Walter, a "privileged confidante" of her father until the 1950s). "Without his women, the work would be missing," he adds.

However, there is no question of approaching the subject "in a frank and unambiguous way", she adds.

Sophie Chauveau, journalist and author of "Picasso, the Minotaur", is interviewed along with Debray on Julie Beauzac's feminist podcast in an episode called "Separating the man from the artist".

Chauveau describes "the irresistible and devastating hold of genius on those who loved him". She evokes a "brilliant" painter as much as a "violent", "jealous", "perverse" and "destructive" man, a "great seducer" not hesitating to conquer and abuse very young women.

These assertions, Debray opines, are "without reference to historical, approximate and anachronistic sources."

Chauveau claims to have investigated "for years" but had no access to the family archives.

'Tearing down an idol'

"The attack is all the more violent because Picasso is the most famous and popular figure in modern art. An idol that must be destroyed," adds Debray.

Picasso's descendants never attacked the book, preferring "not to shed any additional light on it", according to Olivier Widmaier-Picasso.

“How do you resist such a personality?” he wonders. "There are those who got away with it and some who struggled. I don't think it was voluntary and conscious, I think he had such a creative force that he is devoted to his art from an early age and finally, at the end of his life, he was facing the canvas all alone and did not need anyone," he says.

However, he concedes that it is impossible to avoid a debate.

But "you have to show the work in a didactic, rich and varied way, in its formal radicalness, through a broad presentation of the collection and by inviting contemporary perspectives", explains Debray.

Among these perspectives are the French artist Orlan and her series "The crying women are angry", which offers a rereading of the work of Picasso "to put the woman-subject at the centre," and the Belgian visual artist Farah Atassi, who re-examines the question of the painter and his model.

In Barcelona, the Picasso Museum has launched a series of workshops and symposiums inviting specialists, art historians and sociologists to offer a multiplicity of points of view on the work, which are also illuminated by exhibitions devoted to Picasso's sister, Lola Ruiz-Picasso, and Brigitte Baer, ​​an art historian specialising in Picasso's engravings.

When Coco met Pablo - How did Chanel and Picasso influence each other?