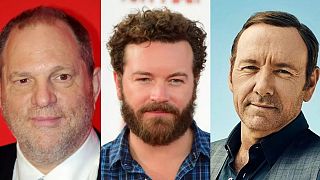 If you thought October was a horror-filled month, four ghouls are haunting the courtrooms and making the creepy season even creepier.

Five years since the beginning of #MeToo, this autumn will see four alleged and convicted sex predators - who have fallen from Hollywood grace - facing trial for sexual offenses.

This rogue’s gallery is composed of Harvey Weinstein, Kevin Spacey, Paul Haggis and Danny Masterson, who will each have their long-awaited court battles in the coming weeks.

The four of the 11 alleged crimes took place during a week in 2013, when Jennifer Lawrence would win an Academy Award for the Weinstein Co.'s Silver Linings Playbook and Quentin Tarantino would win for writing the company's Django Unchained.

Weinstein has been indicted on four counts of rape and seven other sexual assault counts involving five women, who will appear in court as Jane Does to tell their stories. He has pleaded not guilty.

Documentary filmmaker and actor Jennifer Siebel Newsom, who is married to California Gov. Gavin Newsom, is among the accusers of Harvey Weinstein who will testify. The news of her involvement was first reported by The Los Angeles Times.

“Like many other women, my client was sexually assaulted by Harvey Weinstein at a purported business meeting that turned out to be a trap," Newsom's attorney Elizabeth Fegan said in a statement. “She intends to testify at his trial in order to seek some measure of justice for survivors, and as part of her life’s work to improve the lives of women.”

Four more women will be allowed to take the stand to give accounts of Weinstein sexual assaults that did not lead to charges, but which prosecutors hope will show jurors he had a propensity for committing such acts. Like most of the incidents in the indictments, they happened under the guise of business meetings at luxury hotels in Beverly Hills and Los Angeles, which Weinstein used as his California headquarters and where he could be seen during awards season and throughout the year.

The jury selection for the eight-week trial started at the beginning of this week. The proceedings will not open to the public with the exception of 24 reporters and two sketch artists. If Weinstein is found guilty, he could receive an additional 140 years in prison.

Additionally, the film She Said, which fictionalizes the work of two New York Times reporters and their bombshell stories on Weinstein, is set to be released midway through the trial on 18 November. Weinstein's lawyers lost a bid to have the proceedings delayed over the film, with the judge rejecting their argument that publicity surrounding it would prejudice a potential jury against him.

Weinstein's trial is one of several with #MeToo connections that have begun or are about to begin as the fifth anniversary of the movement's biggest moment passes.

The trial is centred on Rapp’s claims of battery and intentional infliction of emotional distress. Rapp is accusing the Oscar winner of trapping him in his bed at a party without his consent in 1986 when Anthony was just 14 years old.

During opening arguments, Spacey’s attorney Jennifer Keller painted Rapp as jealous, untruthful and unreliable because “he never became the international star that Kevin Spacey did.”

Rapp’s attorney Peter Saghir stated that what happened to his client was “something that never should have happened,” and that “the conduct here involved a 14-year-old boy and a 26-year-old man.”

Spacey could be forced to pay up to $40 million in damages for the psychological injuries he allegedly inflicted upon Rapp.

Spacey was previously granted “unconditional bail” in his ongoing sexual assault trial in London, in which the 62-year-old pleaded not guilty to four counts of sexual assault alleged to have taken place in the UK between 2005 and 2013, when he was artistic director at the Old Vic Theatre.

The second week of the trial is ongoing.

Next on the depressing roll-call is Paul Haggis, the Oscar-winning Canadian screenwriter (Million Dollar Baby) and director (Crash) who defends himself against film publicist Haleigh Breest, who claims Haggis assaulted her in 2013 after the two attended the premiere of the film Side Effects.

He is due in court in New York on 17 October.

Haggis, 69, is currently under house arrest in southern Italy, on charges of sexual assault and aggravated personal injury. He was charged with forcing a young non-Italian woman to have sexual intercourse against her will the course of two days in Ostuni, Italy, in June 2022.

He has insisted that “the interaction with Breest was consensual,” and the judge in that case will allow his lawyers to argue that “the accusations are part of a harassment campaign” against him by the Church of Scientology, of which Haggis is a former member.

In 2018, he denied accusations of sexual misconduct made by four women, including two who accused him of rape.

Lastly is the trial of actor Danny Masterson – best known for playing the role of Steven Hyde in That ‘70s Show. The jury selection began yesterday, Tuesday 11 October.

He was arrested in June 2020 on three counts of forcible rape that allegedly occurred in 2001 and 2003 at his Hollywood Hills home. The 46-year-old faces a possible sentence of 45 years to life if he’s found guilty.

Masterson is a Scientologist, and all three of his accusers were members of the church at the time of the alleged assaults. At a preliminary hearing in May 2021, all three said they feared violating the church’s rules and being cut off from their faith community.

The role of the church will be a key theme in the trial, and of the witnesses expected to testify, ex-Scientologist Lisa Marie Presley is reportedly set to be called by the prosecution.