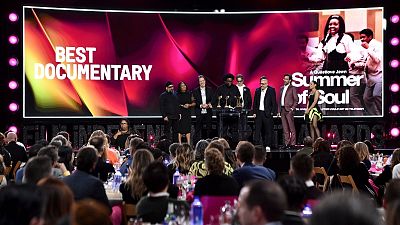 Talk turned to the war in Ukraine on both the red carpet and the stage at this year’s 37th Independent Spirit Awards, which celebrates the best independent films and television series of 2021.

Troy Kotsur, winner of best supporting male for his performance in ‘CODA’, sent out a special message to deaf citizens in eastern Europe.

"I really hope that things will change and that there will be peace as soon as possible, especially with families that are affected. And so my love goes out to all of them and the deaf people out in Eastern Europe right now," the actor, and first deaf winner of supporting male at the Spirit Awards, said.

The award ceremony was held on 6 March in Santa Monica. The Independent Spirit Awards celebrate low-budget projects and independent film-makers.

Director Questlove, whose film ‘Summer of Soul’ won best documentary at the awards, said he understands what it's like to create while disaster is taking centre stage.

"My heart is with the people over there and what they're going through. But yeah, I'm very familiar with that feeling of trying to create art while the world burns," said Questlove.

Actor Jason Isaacs, who was recognised for ‘Mass,’ said he struggled with the idea of attending an awards show during the war.

"I'm sure, like a lot of people, I was in many minds about coming and I thought, well, inside this tent are storytellers who want to use cinema for what it's meant for, which is an engine for empathy. And if there's ever a time when stories have value, it's a time of enormous crisis," he said.

In more tongue-in-cheek scenes, host couple Nick Offerman and Megan Mullally implored the audience to give Putin a "Spirit Awards salute," upon which many raised their hands with a middle finger.

"We're compelled to stand with the people of Ukraine," Stewart said.

"We stand with the hundreds of thousands of refugees fleeing this war."

Who won at the Spirit Awards?

Elsewhere at the ceremony Maggie Gyllenhaal's ‘The Lost Daughter,’ and Japanese independent ‘Drive My Car’ were among the big winners.

Gyllenhaal won best feature, director and best screenplay for her adaptation of the Elena Ferrante novel.

Through tears, Gyllenhaal said that more than anything she believes in love. She was effusive in her praise for her crew.

"You were the first people to tell me I was a director," she said.

Japan's ‘Drive My Car,’ which has also been nominated for a best picture Oscar, picked up best international feature.

Meanwhile, Taylour Paige won best female lead for ‘Zola,’ which was based on a Twitter thread about a wild trip to Florida.

"Wow, I am in shock. I wrote something because I'm not eloquent and I'm drunk," said Piage, who thanked her grandmother who passed away on the day she got word of her nomination.

Simon Rex won best male lead for playing an ex-porn star in Sean Baker's ‘Red Rocket.’ Rex said his career was in the dumps before Baker called him for the shoestring film.

"I'm reeling from the whole experience," Rex said. "This is basically a glorified student film…I'm grateful and humbled."

The show can sometimes serve as a preview of what will happen on Oscar night. Last year, Chloé Zhao's ‘Nomadland’ picked up best feature and director at the Spirit Awards before going on to win the top prizes at the Oscars.

‘Moonlight,’ ‘Spotlight,’ ‘Birdman’ and ‘12 Years a Slave’ also all won at the Spirits before taking best picture at the Oscars.

Follow the Oscars here on Euronews Culture in the very early hours of Monday 28 March.

'This is our story': Lviv museums move to protect Ukrainian heritage