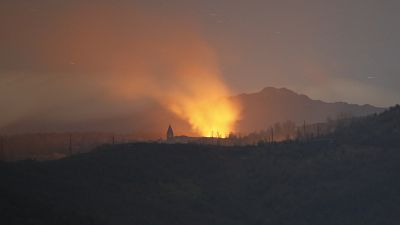 Holy Savior Cathedral in Shushi, outside Stepanakert is attacked during the 2020 conflict between Azerbaijan and Armenia   -   Copyright  AP   -
By Tim Gallagher  •  Updated: 13/09/2022

French film director Robert Guédiguian has made an impassioned plea to French Armenians to donate money to their embattled ancestral homeland.

Guédiguian, who is of Armenian descent, made the appeal to France’s estimated 600,000 Armenians amid escalated violence in the disputed area between the Central Asian country and neighbouring Azerbaijan.

The two countries who have a long history of territorial disputes which has seen violence erupt more than once in the last 40-years.

“I believe that you have to pay taxes to participate in the survival of this country, otherwise I think it is threatened with extinction,” says Guédiguian in a video made by the Armenian Fund of France.

“Don't wait until it's too late, don't put it off for a few months, we have to go now, let's not wait for this country to disappear to help it.”

The video, entitled ‘Armenia, every month’ asks viewers to give monthly donations saying that if every French-Armenian gave €10 a month then it would generate €72 million a year for Armenia.

The money would be funnelled into vital areas of agriculture, education, renewable energy and the rebuilding of partially destroyed villages in the border regions.

What happened between Armenia and Azerbaijan?

Armenia still bears the scars of a six-week war in 2020, which saw Azerbaijan claiming victory after a ceasefire brokered by the Russians.

The two countries have also fought wars in the 1980s and 1990s, with the disputed border region of Nagorno-Karabakh at the heart of the international dispute. Nagorno-Karabakh is within Azerbaijan’s borders but is populated by ehtnic-Armenians.

The nations are also divided along ethno-religious lines with Armenia populated mostly by Christians and Azerbaijan by Muslims. They are both backed by different powerful actors in the region; Armenia by Russia and Azerbaijan by Turkey.

The appeal by the Armenia fund of France is also endorsed by a range of high-profile French-Armenians including photographer Antoine Agoudjian and actress Ariane Ascaride.