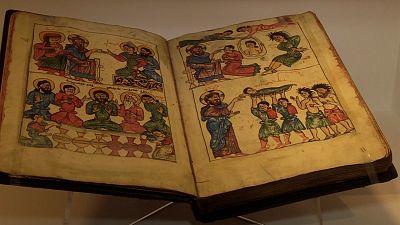 A new museum is delving into the history books of Armenia’s rich wine culture.

When you think of wine, there are always a few classic nations that spring to mind. Maybe it’s the lush valleys of France, the sumptuous vineyards of Italy, or a newer location like California or New Zealand.

But you’d be missing out on one of the oldest wine-making regions of the lot. With a history stretching back over 8,000 years, Armenia has wine-cred by the bottle-load.

Some of the earliest evidence for today’s winemaking industry has been found from pieces of broken pottery that were discovered in the South Caucasus region, where neighbouring country Georgia now is.

A new Armenian wine museum is jumping headfirst into wine’s long history, and showing its deep connection to the religion and culture of the region.

Just 30 kilometres from Armenian capital Yerevan is the heart of the country’s winemaking territory. The museum here is built deep into the surrounding basalt rock and as you go underground, you feel as if you’re entering a giant wine cellar.

There you can find fragments of a myth revolving around the tipple.

Around 800 BC, King Menua, the fifth king of the ancient Urartu region supposedly gifted vineyards to a woman he was besotted with named Tariri.

The ancient myth can be seen on a stone inscription in the museum.

"We passed through a mysterious tunnel and ended up in the 9th century BC in the Urartian Chamber," says chief specialist Narine Melikyan.

A wine cask to die for

Other ancient exhibits show how wine would accompany Armenians from cradle to grave.

A wine jug dated back to the 1st century BC was discovered by archaeologists to have the remains of a woman in it.

Upon further research, the jug - called a karas - was found to be an integral part of an ancient Armenian’s lifetime.

"When a person was born, there was a karas intended for him, during his lifetime, it was used to age wine. And after death, a person was buried in the karas, in the foetal position."

Wine has long held connections with religion. Jesus’s first miracle after all, was converting water to wine, and the museum has centuries-old Armenian bibles to demonstrate that.

The museum also holds phallic-shaped stones, which were idols in ancient times. During rituals, ancient Armenians poured wine over the idols as a sacrifice to higher powers.

In 2011, a 6,000-year-old Copper Age wine factory was discovered in southern Armenia. And the 8,000-year-old broken bits of pottery found to the north in Georgia are thought to be the earliest known evidence for the origins of today’s winemaking industry.