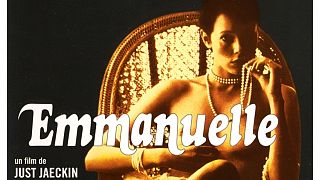 It was announced by French press yesterday (Wednesday 7 September) that the filmmaker and photographer died at his home in Brittany surrounded by his family.

Jaeckin was born in Vichy in 1940, and began his career as a fashion photographer in the 1960s, when he worked for magazines such as ELLE, Marie Claire and Vogue.

After Emmanuelle, he worked on other cult films such as Histoire d'O and Lady Chatterley's Lover, which earned him the moniker of "King of Softcore".

Emmanuelle was the most watched film in France in 1974 and quickly became one of the highest grossing French films of all time. Almost 9 million tickets were sold for the film and it remained on the billboard of major Paris cinema UGC Triomphe on the Champs-Elysées for a grand total of 13 years.

Originally held up by French censorship authorities, the film was allowed to be released fowllowing the death of French President Georges Pompidou. This led to the election of Valéry Giscard d’Estaing in May 1974 and the lifting of restrictions in France regarding films with “pornographic” content by the new Secretary of State for Culture Michel Guy.

While it would not shock anyone today, the then-scandalous film made headlines and became a societal phenomenon.

Thousands flocked to France in the 70s to watch the film, which was banned in several other countries, especially Spain, which was under Franco’s stringent censorship rules at the time.

On the international scene, Emmanuelle was seen as a softer cousin to films released in 1972 like Gerard Damiano’s Deep Throat and Bernardo Bertolucci’s Last Tango in Paris.

Still, the iconic marketing images and posters created a sizeable buzz and within the first week of its release, it reportedly doubled the number of tickets sold for Last Tango in Paris.

Emmanuelle went on to seduce other international audiences, with 2 million admissions in Japan, 3 million in Spain since 1978, and more than 4 million in Germany. Columbia Pictures released the film theatrically in the US, making it the first X-rated film released by the company. As for the UK, Emmanuelle was the first adult film to play in theatres, after receiving extensive cuts to most of the largely suggestive sex scenes.

Indeed, beyond its scandalous reputation, Emmanuelle suggested rather than outright showed, but it still broke new ground when it came to showing female pleasure on screen. The film’s star Sylvia Kristel even stated that audiences in Asia saw the film as empowering.

“Japanese feminists were rather delighted with the film because they thought Emmanuelle was dominant, just because of this one scene where she climbs on top of her husband,” said Kristel. “That was the moment when all the Japanese women stood up and applauded."

In Japan, the film popularized the phrase "emanieru suru," which directly translates to "to do Emmanuelle" - meaning "to have a casual and extravagant love affair."

Several sequels were released and a saga was created. Each film was less well received than the previous instalment. Sylvia Kristel appeared in many of the sequels, including Emmanuelle, The Joys of a Woman in 1975 and Goodbye Emmanuelle in 1977.

Wishing to capitalise on the international popularity of Emmanuelle, Italian film producer Mario Mariani went on to create a new series, skirting copywrite rules by dropping one ‘m’ in the protagonist’s name. Thus was born the series Black Emanuelle, starring Laura Gemser, which tallied a further 7 films.

Soon, a new film will be made by Audrey Diwan, the winner of last year’s Golden Lion in Venice for Happening.

Emmanuelle will be played by French actress Léa Seydoux (Blue is the Warmest Colour, No Time To Die, Crimes of the Future) and the film is rumoured to update the sexual politics of the original film and focus on avoiding the male gaze by further prioritising a depiction of lust and desire from a female point of view.

Euronews Culture's Film of the Week: 'Twin Peaks: Fire Walk With Me'