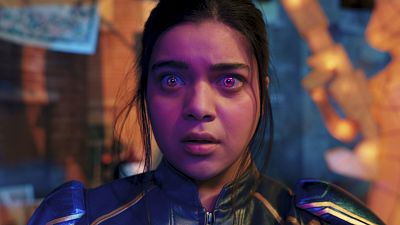 Iman Vellani is cast in 'Ms Marvel' after a lifetime of enthusiasm for the Marvel Cinematic Universe   -   Copyright  AP
By Tim Gallagher  •  Updated: 15/06/2022

It seems like every fan’s dream is to be cast in the franchise they love. But does it have its drawbacks?

Iman Vellani is due to join the Marvel Cinematic Universe (MCU) as Kamala Khan in the new Disney+ series ‘Ms Marvel’. She is a Marvel superfan who has obsessed over the superhero creations since childhood.

The teenager, who is an avid comic book reader and obsessed with Robert Downey Jr’s ‘Iron man,’ fondly recalls seeing the ‘Ms Marvel’ comics when browsing in a store and feeling represented for the first time.

But it all been a walk in the park?

“Brie (Larson) is on my wall and she’s in my phone book. So, like, that’s weird,” said Vellani in a recent interview.

She also recalls getting a few bruises on her first day of stunts, as well as badgering the producer who wanted her ‘just to act’.

What may seem like every fan’s dream isn't always plain sailing. Let's take a look at the actors playing the role of a lifetime whose past came back to haunt them.

When Peter Capaldi was announced as the 12th incarnation of the Doctor more than a few eyebrows were raised.

There were those who remember him as being the potty-mouthed spin doctor Malcolm Tucker from 'The Thick of It', wondering how he’d fit into a children’s TV show. And ageist fans said Capaldi was too old to play a erm…900-year-old time lord.

But perhaps no one was as taken aback as Capaldi’s old nemesis; former president of the official Doctor Who fan club, Keith Miller.

“He haunted my time running the fan club, as he was quite indignant he wasn’t considered for the post,” Miller wrote in his book, ‘The Official Doctor Who Fan Club Volume One’.

It seems Capaldi was a superfan of Doctor Who from a young age and regularly pestered both his arch-rival Miller and the production team at the sci-fi show.

The Producer’s assistant became so exasperated with Capaldi’s constant mithering that she told Miller he wished the Daleks would ‘exterminate’ the future actor.

Who would have thought that decades later he would be playing the eponymous hero and all this would resurface to embarrass him?

The legacy of ‘Harry Potter’ films have been defined by nothing as much as the irritating know-it-all fans who constantly lectured everyone about trivia from the franchise. But did you know one of those very people was in the cast?

Evanna Lynch encapsulates the dreamy eyed, away-with-the-fairies essence of Luna Lovegood so completely it seems bizarre to think she was also already a superfan of the films before she go the part.

"I got utterly obsessed,” the actress told the hosts of the ‘Normal Not Normal’ podcast.

Prior to being chosen to play Lovegood from thousands of young hopefuls, Lynch was a valued member of the community on Mugglenet and wrote fan fiction which she posted on the site.

The star’s obsession even stretched to knowing intimate details of her cast member’s lives.

"I was stalking everyone," Lynch told the podcast.

Let’s hope she never slipped any of her stalking victims a love potion on set.

The internet may know Tom Holland mostly as ‘Mr Zendaya’ but he is more broadly recognised as the latest iteration of building climber and bite victim, Spider-man.

The Tobey Maguire and Andrew Garfield (also a superfan) versions of Spider-man are well established canon. However, by the time Marvel’s ‘The Avengers’ came along there was one problem; Sony owned the rights to Spider-man and the MCU is owned by Disney.

Holland was one of the frustrated fans who longed to see iconic Marvel character Spidey joining Tony Stark and the gang, and he got his wish when Sony and Disney agreed the right price for Spider-man to enter the MCU.

Little did Holland know he’d be playing the character at the age of 19. Now aged 25 Holland released the final film in his Spider-man trilogy ‘Spider-man: No Way Home,’ to rave reviews.

But Holland’s superfan past came back to haunt him when he appeared on the UK’s ‘Graham Norton Show’.

While on the famous red couch, the host surprised him with photos of him playing with Spider-man toys as a child and a photograph of him as an adult holding up a tiny Spidey costume his mum had saved from his childhood.

Adorable, yes. Does it live up to his superhero image? Not quite.