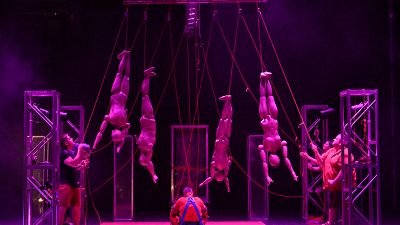 Actors perform the adapted novel by George Orwell "1984" on the stage of the Podil theatre located in the center of Ukrainian capital of Kyiv on June 25, 2022   -   Copyright  SERGEI SUPINSKY/AFP or licensors
By Jonny Walfisz  with AFP  •  Updated: 28/06/2022

A new adaptation of 1984 has opened in a Kyiv theatre. The dystopian classic has gained a new sense of relevancy against the backdrop of the ongoing Russian invasion.

The first showing was met with joy from actors and spectators until the performance was interrupted by a bomb siren.

Theatre on Podil, one of Kyiv’s most vibrant theatres reopened for the first time earlier this month. The return of the theatre was greeted with emphatic support immediately, as Kyiv residents rushed to get tickets for sell-out runs.

The theatre’s latest show, a staging of George Orwell’s 1984, hits at the heart of the country’s circumstances.

Themes from the 40s relevant today

The novel, published in 1949, depicts a totalitarian state inspired by Stalinism and Nazism where freedom of expression no longer exists and thoughts are monitored.

“It's so relevant that you just can't pass it up,” actor Igor Nikolayev said shortly before the play's first performance since the war began. “This show speaks for itself very clearly, and the audience will be all the more convinced that there is good and evil, absolute evil.”

“I can confirm every word written by George Orwell, as someone who lives it," added actress Yulia Brusentseva. The play is “incredibly relevant not only for Ukrainians but for Europe as well”.

On the theatre’s website, the description says that while the novel was written in 1949, “today we are in its imagination.”

A pervasive theme of the novel is “doublethink”, where citizens must think and believe what the political party decides is the truth.

It's a theme that theatregoers see reflected in their current reality, in the midst of an invasion which the Russian government insists is a “special military operation”, banning words like 'invasion', 'assault' and 'war' from the media.

Back in March Russia's parliament even passed a law imposing a jail term of up to 15 years for spreading intentionally "fake" news about the military and its operations in Ukraine.

This narrative has been described as a lie by Kyiv and its Western allies.

The play deals with understandably shocking scenes. Each night an audience of 250 Kyiv residents watch depictions of torture, dehumanisation, police brutality and executions.

The play was originally programmed for before the war began. For many spectators who bought their tickets long before the invasion, the parallels of their lives with the characters are hard not to miss.

“Now that there is war, it’s relevant to see 1984,” said Roman Valenko, an audience member.

The war has had a damaging effect on the lives of creative professionals. As theatres, cinemas and the Kyiv opera slowly open, many people within the industry are starting to see some return to normality.

"This is my first show in four months," says Yuri Felipenko, who plays the role of O'Brien, an agent of the Thought Police in the novel. "Culture is part of our nation, we can't live without culture," he says.

The Russians "do not want the Ukrainian people to exist. It is our duty to keep culture alive now," says actress Brusentseva.

Originally from Severodonetsk, a city in the Donbas region which was recently taken over by the Russian army after weeks of relentless bombing, Busentseva detailed the horrid imprint the war has left on her life.

“My mother was able to leave, my uncle was killed, my grandmother remained in occupied Severodonetsk,” she says.

Even in central Kyiv, where the war has abated enough for theatres to run, the effect of the war is still felt. The Saturday performance was interrupted by a bomb alert.

The following performance on Sunday had to be cancelled after a missile strike hit a neighbourhood near the centre of Kyiv at dawn.