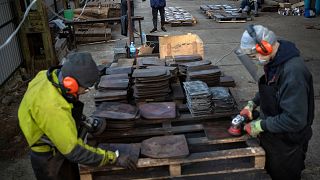 A group of Ukrainian artists have been producing military supplies for the defenders of Kyiv   -  Copyright  AP Photo
By Theo Farrant  & AP  •  Updated: 25/03/2022

A community of artists in Kyiv have transformed their art space into a small factory producing bulletproof vests, anti-tank barricades and pot-belly stoves for Ukrainian reservists.

The artists, from Kyiv-based NGO Kosmos Tabir, had renovated the underground space and initially planned to use it to host various art projects.

But when war came, they decided to use it to help the Ukrainian army in defending the capital.

Helping in the fight against Russia

Anton Felemenyuk, one of the artists, said they began by making small anti-tank barricades, before scaling-up to full-size barricades.

In the first two weeks of the war, the artists produced around 150 anti-tank barricades.

They then moved on to producing bulletproof vests, starting by preparing plates and later sewing vests.

"We are fighting here not even for freedom, but for existence," said web-designer and photographer Svitlana Dolbysheva.

"That's why I never had the idea of fleeing and I'm really glad that I came here," she added.