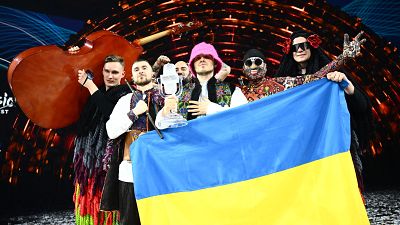 Britain says it has agreed reluctantly to host next year's Eurovision Song Contest after organisers declared there is no prospect of the event going ahead in war-torn Ukraine.

The BBC, the UK's public broadcaster, will instead produce the world's biggest live music event, taking in performers from across Europe and Central Asia as well as Israel and Australia, in a UK city yet to be determined.

“It is a matter of great regret that our colleagues and friends in Ukraine are not able to host the 2023 Eurovision Song Contest,”said Tim Davie, the BBC's director general.

Ukraine's folk-rap group Klaus Orchestra won this year's contest, held in Italy, ahead of Britain's entry. For the past month, the country had insisted it could host next year's despite the Russian invasion.

But after the European Broadcasting Union (EBU) ruled that out on security grounds, the government in Kyiv acquiesced to a UK-hosted event with a strongly Ukrainian flavour.

British Prime Minister Boris Johnson said that after phone talks last week with President Volodymyr Zelensky, they, "agreed that wherever Eurovision 2023 is held, it must celebrate the country and people of Ukraine".

"As we are now hosts, the UK will honour that pledge directly - and put on a fantastic contest on behalf of our Ukrainian friends," Johnson tweeted.

The response to the news from residents in Kyiv appears to be mixed.