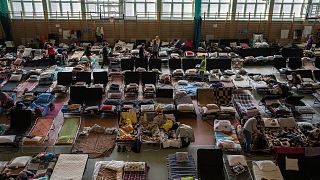 A hall is prepared in Poland for Ukrainians fleeing the war   -   Copyright  AP /Petros Giannakouris
By Tim Gallagher  •  Updated: 17/03/2022

Of the now three million refugees that have fled Ukraine, many LGBT+ people are amongst them, and besides the inherent dangers of war they have much to fear from the Russian invasion.

Putin’s Russia is rampant with discrimination against the LGBT+ community, with the so-called ‘Gay Propaganda’ law prohibiting talking about gay and trans issues in schools, under the guise of protecting children.

Pride parades are banned in Moscow, but that hasn’t stopped leaders in the Russian Orthodox Church from blaming them for the invasion of Ukraine. Meanwhile, Russian police have been accused of sending gay men fleeing Chechnya back to the autonomous region, where they are likely to face torture and death.

Inside Ukraine, Luhansk, one of the breakaway pro-Russian ‘republics’, has outlawed homosexuality and in February the US intelligence community stated it had seen evidence to suggest the LGBT+ community would be targeted with human rights abuses during a Russian occupation.

What dangers do LGBT+ Ukrainians face?

At the start of the war, reports of racism by guards against people of colour on the border shocked many, but LGBT+ Ukrainians fleeing the invasion have faced their own problems.

“Transgender women are very scared to approach the checkpoint or face police and soldiers, trans men were asked why are you leaving?” says LGBT+ activist Amanda Waliszewska.

“It’s been much slower to move them because they’re scared to leave.”

Through PayPal and a Google form, Waliszewska and a network of other activists have helped an estimated 2,000 people flee the war, although the exact number is difficult to calculate due to the nature of their work.

Although cities like Kyiv and Lviv have thriving queer scenes, and despite pro-LGBT statements by president Volodymyr Zelenskyy, attitudes to the community remain ambivalent overall.

Waliszewska says that in Ukraine many people remain closeted from their families and that this, and the discrimination LGBT+ face, present particular problems in the current circumstances.

“When I was helping, they were closeted and scared to travel with other people,” she says.

“They wouldn’t even go to the shelters with other people and would just stay at home because you don’t know who you’re going to meet.”

Where can LGBT+ Ukrainians go?

Countries that border Ukraine like Romania, Hungary and Poland are not naturally hospitable for LGBT+ Ukrainians fleeing the war.

Gay marriage is banned in the constitutions of both Romania and Hungary the latter of which has a ‘gay propaganda’ law of its own.

Both Hungary and Poland have been taken to task by the EU over their treatment of the LGBT+ community and in 2020 many regions in Poland, comprising almost a third of the country, declared themselves ‘LGBT free zones’.

“Russian, Ukraine, Poland; they are all Slavic and pretty religious,” Waliszewska says.

“Of course they are scared of Russians but they’re also scared of meeting Ukrainians, Slovaks and border guards. Even when they reach Slovakia and Poland they face discrimination, being beaten up, or being put in a cell.”

When Budapest Pride posted on Facebook to ask for help rehousing LGBT+ Ukrainians they were immediately trolled, and activists told US outlet NPR they don’t trust the government to help them.

Waliszewska meanwhile is focused on helping LGBT+ and BIPOC Ukrainians to reach places of safety in northern or western Europe.

“All people that are marginalised I would send to Germany or Sweden,” they say.

“If I had people of colour and trans people I know they will face much less discrimination from the officials at least.”