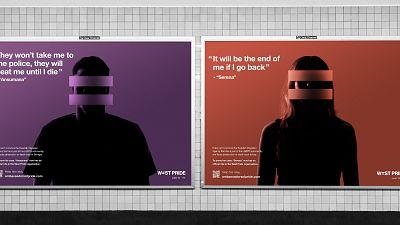 In countries around the world, many queer people live a secret existence for fear of persecution by their families, communities or the state.

For some the situation becomes so desperate that they are forced to flee to other countries to seek asylum for their own safety.

But on arrival, they are often asked by authorities to ‘prove’ that they are LGBTQ+, begging the question; how do you prove you’re LGBTQ+ if you’ve had to hide it your whole life?

A new campaign by West Pride, an annual event held in the city of Gothenburg, Sweden, aims to highlight the problems posed by this very question.

West Pride have teamed up with design company AKQA to create a billboard and social media campaign which highlights the plight of LGBTQ+ refugees caught up in the Swedish immigration system.

Each billboard will feature an anonymous refugee and share their story, telling the journeys of six asylum seekers this Pride Month.

“Far too many are wrongly sent back to a lifetime of persecution, imprisonment or death. We need to stop this now,” says Gunterberg Sachs.

When the EU Agency for Fundamental Rights did a report on LGBTQ+ asylum seekers in 2017, no member state was able to provide official figures on the numbers entering the country.

Nations that could provide estimates did so through civil organisations with the Netherlands estimating between 100 -1000 and Denmark given 70.

There have been widespread reports of LGBTQ+ refugees from the Middle East and West Africa reaching Europe in the hopes of a better life, only to be asked for proof of their sexuality in the tolerant countries they are going to for sanctuary.

West Pride has given their Ambassadors of Pride official roles in an effort to give their asylum claims legitimacy. The organisers are also working with lawyers to offer them free legal counsel.

A petition demanding a just process will be handed over to Minister for Migration and Asylum Policy Anders Ygeman on World Refugee Day on 20 June.

“​​We’re lucky to work with such a brave organisation as West Pride, and hope that this initiative can help both these six and future LGBTQ refugees to stay safely in Sweden,” says AKQA Senior Creative, Sebastian Regfeldt.

“With this idea, we look to highlight how LGBTQ refugees put their life on the line in the asylum process, having to prove something they’ve been forced to hide their entire life.”

The West Pride festival is held in Gothenburg, Sweden, focusing on creating safe spaces for the LGBTQI community. In 2022 it is running from 13th to 19th June.