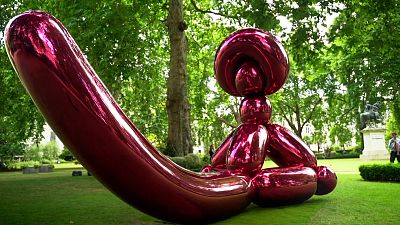 The sculpture was donated to Christie's by Ukrainian billionaire couple Victor and Olena Pinchuk and the money raised will go towards vital funds for humanitarian aid for Ukraine - particularly to assist soldiers and civilians in need of prosthetics, medical treatment and rehabilitation as a result of the war.

The sculpture will stand in St James's Square adjacent to Christie's UK headquarters in London until 3 July 2022.

"We very much hope that people will come and see it and enjoy it and see it flanked by trees and in an environment they can imagine at home," says Katharine Arnold, head of post-war and contemporary art at Christie's.

How much has Jeff Koon's previous work sold for?

Koons' sculptures are among some of the most expensive to have ever been sold at auction.

In 2019, a stainless steel sculpture of a rabbit by Jeff Koons set an auction record in New York, fetching over $91 million.

The sale of Koons' 1986 "Rabbit" at Christie's was the most expensive work by a living artist ever sold at auction.

In pictures: how is summer solstice celebrated around the world?