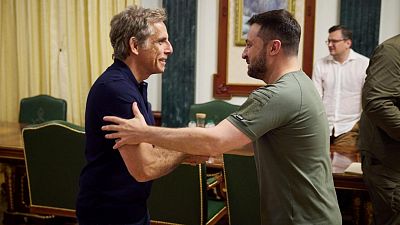 Hollywood star Ben Stiller said his fellow comedic actor Volodymyr Zelenskyy was his hero as he met the Ukrainian president in Kyiv.

Stiller was in Ukraine as part of his role as a goodwill ambassador for the United Nations High Commission for Refugees.

"You are my hero," Stiller said as he met the president on World Refugee Day. "You quit a great acting career for this."

"Not as great as you," Zelenskyy replied in English.

"What you have done, the way you rallied the country and for the world, it's really inspiring," Stiller told the president, adding that it was hard to understand what's going on in Ukraine if you haven't already visited.

Stiller, whose Hollywood credits include Zoolander, Meet the Fockers, and Dodgeball, also visited the town of Irpin and talked to people directly affected by the war.

"You see it on TV, you see it on social media, it's something else to actually see it and feel it and then to talk to people. We have talked to a bunch of people," the Tropic Thunder star said.

Also on Monday Stiller met with the new US Ambassador in Ukraine, and commended her work to re-open the American Embassy in Kyiv.

Stranded in Iran: How one refugee’s experience shaped her career

Meet the Somali refugees breaking through in the Nordics