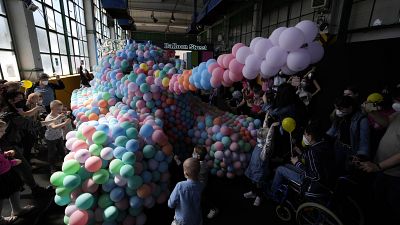 The Balloon Museum in Rome invited sick Ukrainian and Italian children for a special day out   -   Copyright  Alessandra Tarantino/AP
By Euronews with AP  •  Updated: 29/04/2022

Sick children from Ukraine and Italy joyfully destroyed a tank made of balloons at an exhibition in Rome on Thursday morning, on a day off from their treatment.

The young patients, mostly with oncological and neurological diseases, had the chance to walk out from the Bambino Gesù hospital and from the connected foster homes to visit the Balloon Museum in central Rome.

It was a cheerful day for the young children who dived into a big pool made of thousands of plastic balls - they also played with giant inflatable flowers, pedalling bicycles to light them up.

The tank of balloons was already an attraction before the war began in Ukraine.

It was created as a pacifist art installation, but it acquired an even stronger meaning after Russia's invasion.

The children blew it up, balloon by balloon, hoping it could bring peace to the war-torn country.

Cancer during times of war

Anton Androsov 19, and his 9-year-old brother, Daniel are originally from the Donetsk region.

But over the past two years, after the death of their father, they moved to Bila Tserkva, a city near the Ukrainian capital, Kyiv.

The two brothers lost their mother too in 2013. The brothers arrived in Italy at the beginning of the war, almost two months ago.

Daniel had cancer and he has just finished his therapy.

His treatment is now being monitored at the oncology department of the Bambino Gesù hospital.

Bambino Gesù is the main paediatric hospital in central Italy and has treated almost 500 Ukrainian children since the beginning of the war - approximately 30 children are currently hospitalised there.

Seventy more children are being hosted in foster homes in coordination with the Bambino Gesù hospital to undergo regular check-ups without having to be hospitalised.

Nataliia Shabatina fled from Makariv, a city 60 kilometres west of Kyiv, with her 5-year-old daughter Maria.

She found medical assistance at the Bambino Gesù for a disease in her daughter's eyes.

When asked about the situation in her hometown, Shabatina said it's "very difficult, every day."

The free visit to the Balloon Museum was organised by Lux Eventi, the balloon exhibition curator, as well as by various charities, such as Tabor International and the House of Andrea.