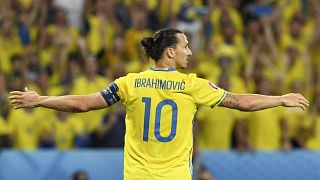 Still playing professionally for AC Milan despite being 40 years of age, Swedish striker Zlatan Ibrahimović will see his legacy immortalised with the release of a film devoted to his rise to footballing glory.

The film makes its theatrical debut today (Friday 18 March) in his native country of Sweden.

Repeatedly postponed due to COVID restrictions, the film, 'I am Zlatan', is based on the autobiography of the same name published in 2011.

It focuses on the AC Milan star's first twenty years in a multicultural district of the city of Malmö in southern Sweden, as he establishes himself in the world of football.

The rise of Zlatan

"When I read the first chapters of the book, I thought of my own childhood", explains director Jens Sjögren.

By focusing on the player's youth, the film is likely to appeal to everyone, in other words not just exclusively to the diehard fans who have closely followed the star's whole career, notably with PSG and a short but bright spell with Manchester United.

Zlatan, who sometimes speaks of himself in the third person, is Sweden's most prolific goalscorer with 62 goals, in addition to 115 international caps.

For Sjögren, it was important that the film be told from the point of view of a child.

The audience "experiences through them what they experience. So if there are things they don't hear or understand, then we as viewers shouldn't understand them either", he underlines, noting that this approach contrasts with other media sometimes too keen to spoon-feed information.

Who plays Zlatan Ibrahimović in the new biopic?

Dominic Bajraktari Andersson, 15, and Granit Rushiti, 22, both play the legend at different ages.

"He's a great footballer, one of the best in the world. He's a legend, so of course, it's a great honour for us to play his role," says Granit Rushiti.

Rushiti, a former aspiring footballer who retired due to a cruciate ligament injury, was heavily inspired by the striker.

"I've played football all my life so he's been a big part of my life and my own football career. So I've taken a lot of things from him, a lot of fakes and the way he plays", he says.

Like Zlatan, Rushiti and the film's other young star are from Skåne in the far south of Sweden.

"I haven't always played football, but he's been a role model in other ways. Like his behavior and who he is as a person. We're pretty much from the same region, from the same city, Malmö. So he was a great role model," says Dominic.

At the end of filming, the two young actors, for whom this is their first film, met their idol in Milan.

"Before I started shooting, I thought Zlatan was pretty tough, he almost looked scary. But when I met him, he was very nice, very charming and joking. He made me relax and all my nervousness disappeared," the teenager recalls.

"It was like meeting a living legend that you looked up to," he adds.

'I am Zlatan's release in other countries is to be announced soon.

Check out the video above for a teaser of the film

'Elvis', the biopic we've all been waiting for is coming in June