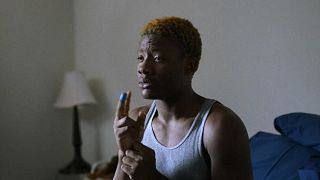 'Audible' is an Oscar-nominated documentary short which tells the story of a deaf Maryland high school football team on a winning streak.

The film introduces viewers to Amaree McKenstry-Hall, a high school athlete in his senior year at Maryland School for the Deaf in Frederick, Maryland, as he deals with the recent loss of his best friend who died by suicide.

The documentary examines the diversity of the deaf community, including those who identify as Black or LatinX.

Greater representation for deafness in film

For Amaree McKenstry-Hall, the film's main subject, it is a privilege to be able to represent the deaf community at the Oscars.

"To see so many people vote for 'Audible' for it to reach a nomination, it feels like a tremendous honour as a BIPOC individual plus representing the deaf community, it's so exciting," says Amaree.

The director of the documentary, Matt Ogens, said the film taught him to listen more and talk less, and feel more and think less.

He also says he hopes both 'Audible' and 'CODA' - which is nominated for three Academy Awards including best picture - will help propel Hollywood to tell more inclusive stories, without a central focus on a character's disability.

"Rather than it being, having films about deaf - about being deaf, about the topic of deaf - why not just tell regular stories and the characters just happen to be deaf? There's a really big difference," comments the director of Audible.

Troy Kotsur, who plays Frank Rossi in CODA, recently became the first deaf actor in history to win a BAFTA - scooping up the award for Best Supporting Actor.

'Audible' is currently streaming on Netflix.