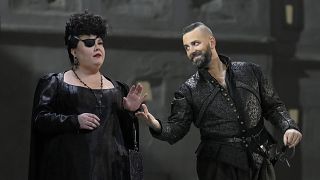 David Rosen walked into France's Bibliothèque-Musée de l’Opéra National in the summer of 1968 and requested the original materials from when Giuseppe Verdi’s “Don Carlos” premiered at the Paris Opera in 1867.

Handed the Opera's manuscript copy of the score, the musicologist found several cuts, including an unfamiliar passage in a key duet between King Philippe II and Rodrigue, the Marquis of Posa, that was missing from the autograph score in Verdi's hand. The passage was clasped, deleted by Verdi before opening night to allow the audience to catch the final train of the night, a 12:35 a.m. to the suburbs.

“It was hiding in plain sight,” the 83-year-old retired Cornell professor recalled to The Associated Press.

The Metropolitan Opera is presenting the original French version for the first time starting Monday night after 217 performances of the extensively revised and translated Italian version more familiar as “Don Carlo.” The eighth and final performance on March 26 will be broadcast to cinemas worldwide.

“The color of the language is more rooted in what we do in French,” said Yannick Nézet-Séguin, the Met’s French-Canadian music director. “The consonants are very expressive in French. You can elongate them more. You can also shorten them. You can make them explode more or less. And I feel that this changes subtly but consistently the impression that the listener will have when listening to a great melody by Verdi. In Italian, of course, consonants are important but it’s rooted much more into vowel.”

“Don Carlos,” Verdi’s second Paris commission after “Les vêpres siciliennes (The Sicilian Vespers)” in 1855, adhered to the grand opera form Parisians demanded: five acts, including a ballet. The Met’s adaptation uses the original libretto by Joseph Méry and Camille du Locle that includes elements of Friedrich Schiller’s “Don Carlos” plus a first act in the Fontainebleau forest and a third act burning of heretics based on Eugène Cormon’s play “Philippe II, Roi d’Espagne.”

The Met has also restored many elements of the original.

Family drama worthy of a Netflix series is wedged in. Carlos, the Prince of Asturias, is engaged to France’s Élisabeth de Valois, but the Peace of Cateau-Cambrésis called for Élisabeth to marry Carlos’ father, Philippe of Spain. Princess Eboli, a member of the court, has an affair with Philippe; Carlos confronts his father with a sword when defending the Flemish, and Rodrigue sides with the king and makes his friend give up the weapon. The king is trapped between his own power and that of the Catholic Church, wielded by a 90-year-old, blind grand inquisitor.

“Don Carlos” is Verdi’s longest opera at more than five hours uncut, with intermissions. The rehearsal of Feb. 24, 1867, included 3 hours, 47 minutes of music stretching until 12:23 a.m., and by the March 9 run-through the music was trimmed by 19 minutes, according to Andrew Porter’s research, citing La Gazzetta Musicale di Milano and L’Art Musical.

Following discoveries by Rosen and Porter, Ricordi published a complete vocal-piano edition by Ursula Günther in 1974 that included versions as rehearsed in 1866 and 1867, the premiere of March 11, 1867, and the second performance two days later along with revisions of 1884 and 1886.

The University of Chicago Press’s 31-volume Verdi Critical Edition's “Don Carlos” will be edited by Gabriel Dotto and likely will contain a Paris score and Italian editions of four acts (Milan 1883) and five (Modena 1886). Dotto said his task is to decide what cuts were made at Verdi's behest and which "were imposed instead for completely pragmatic reasons.”

The Met took 1866 and 1867 rehearsal materials and opening night as sources, intertwining them with marked-up parts that much of the orchestra had used in the 2015 revival in passages identical to the four-act Italian.

“Many operas are puzzles that we librarians have to put together, which is one of the things I love most about our work,” Wendy Skoczen, the Met’s chief librarian, said in an email. “Without question, this is one of the more complicated works in standard repertory and particularly for Verdi.”

For acting principal clarinet Jessica Phillips, hearing French lyrics while Italian words are in her music can be disconcerting at times.

“It’s very different, especially for the wind players,” she said. “The length of the vowels and the repetition of the consonants in French are quicker.”

When orchestra rehearsals started Feb. 14, Nézet-Séguin shortened a 16th note here, lengthened an eighth note there as he sang the vocals — including the Celestial Voice ending the auto-da-fé. Just before Eboli’s “O don fatal,” the conductor pointed out to principal bassoon William Short how “it’s very different without the bub bub bub of the trumpets.”

Marking an adjustment during the death of Posa, Nézet-Séguin quipped: “It’s not really clear in the score, so I made the executive decision. I’m going to tell Giuseppe one day.”

Dupuis performed Rodrigo in Italian at Berlin in December and has to fight off muscle memory when phrases start on different beats, notes are elongated, words are reversed in translation and pronunciation is altered, such as “sire.”

“Accidents do happen still,” he said.

An example of the transformed mood is the ending of the Carlos-Élisabeth duet, sung a semitone lower in the 1867 French.

“It’s calmer. She’s going to the convent and he’s going to fight the war, and it’s all like: It’s OK, these are our fates,” Dupuis said. “Whereas in the Italian, it feels like they’re ripping each other’s hearts out.”

The Met drops the opening woodcutters — among the sections jettisoned by Verdi to shorten run time — and the ballet La Pérégrina. It includes the second act duet between Rodrigue and Carlos, the fourth act scene among Eboli, Élisabeth and Le Comte de Lerme, and the fourth act finale. The fifth act finale uses a quieter version of the monks rather than the louder 1884 revision, which is planned for the November Italian revival.

While the Met has abandoned plans to present Stefan Herheim’s Covent Garden “Vêpres,” Nézet-Séguin hopes to get a French staging back on track. The “Don Carlos” rehearsal process struck a chord for him.

“Hearing it as a whole,” he said, “I feel there is more fluidity in French.”