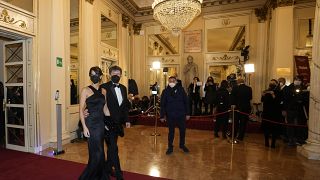 While many European theatres remain closed due to the pandemic, the famed Teatro alla Scala opened its new season with the gala premiere of Verdi's "Macbeth" to a full house.

La Scala resumed performances at full capacity in September, but there remain considerations for the pandemic: attendees must be vaccinated or recently recovered to attend performances in Italy under new government regulations launched this week for the holiday season.

After last year's televised-only premiere, the in-person season opener was a positive signal for one of the world's top opera houses, even as live performances elsewhere continue to suffer as the virus makes a winter resurgence.

Italian President Sergio Mattarella was there and was roundly applauded by those in attendance, at what has long been heralded as the cultural event of the European calendar.

It will likely be the last time for him as his term expires in 2022.