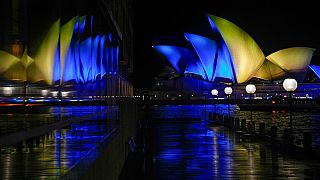 The sails of the Opera House are illuminated with the colors of Ukraine's national flag on Feb 28, 2022, in solidarity with the country's people and government   -   Copyright  AP Photo
By Euronews  with AP  •  Updated: 28/02/2022

Australia has said it will provide lethal military equipment to Ukraine to help the Ukrainians resist the Russian invasion.

The Australian government's announcement Monday gave no details on what material it may be sending.

The move follows an offer on Friday of non-lethal military equipment, medical supplies and a €2.7 million contribution to a NATO trust fund for support for the besieged country.

It has also targeted with sanctions 13 individuals and entities in Belarus, including that country's defence minister, Viktor Khrenin. Belarus is supporting Russia in its war with Ukraine.

'The Batman' release halted in Russia as Hollywood joins the protest