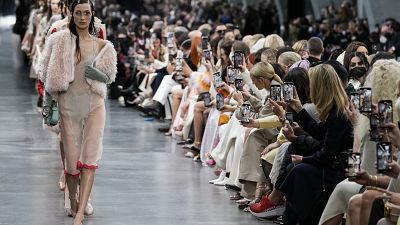 After a hiatus of two years, Milan Fashion Week is back on the runway, with shows previewing on 24 February to international audiences.

Indeed, some in the audience were Russian buyers who descended on Italy’s style capital despite tensions in Europe over a potential Russian invasion of Ukraine which has since taken place.

A special agreement brokered between the Italian National Fashion Chamber and the government allowed Russians who were vaccinated with Sputnik V, not on the approved list for entry to Italy, to attend the event.

Show invitations also were extended to Ukrainian buyers, but they did not attend, according to the fashion council.

One highlight was the preview of Collection 0 by Ennio Capasa, the son of Milan’s fashion council president Carlo Capasa, but as the music started the first runway offerings for this season were mostly womenswear.

Let’s take a look at the designers back at Milan Fashion Week.

Jones' latest collection took inspiration from the late Karl Lagerfeld and interplayed chiffon sheers with tweeds, giving a playful edge to daytime and imbuing evening with a fresh sexiness.

For Fendi's Autumn-Winter 2022 collection, chiffons were patchworked together with a ruffled exterior stitch into day dresses with matching bloomers, worn with cropped fur, or ruffle-edge tops with pants.

Bright gloves or bags in orange, and grounded by seafoam green, offset the pastel tones.

Add-ons like big, belted flat pockets added a utilitarian flair that worked over chiffon dresses in conjunction with the corsets or as an embellishment to a skirt or trouser.

"It's a wardrobe designed for every aspect of a woman's life, for every generation,'' Jones said.

Cavalli and No. 21 aim to unite the generations with a fun-loving display

From J-Lo to Zendaya, Fausto Puglisi wants to unite generations of alluring, strong women through his new collection for Roberto Cavalli.

Puglisi's first winter runway show as creative director of the brand brought together delicate gowns with leather straps that gave a hint of bondage, along with younger silhouettes, including manifold skin suits in black and animal prints, and bouncy pleated plaid miniskirts.

"I want to respect the heritage of Roberto. That was extraordinary,'' Puglisi told reporters.

"Never before has there been such a desire to return to the early 2000s. At the same time, there is the desire to move forward."

Puglisi did so with an accent on daywear that included suits in bright Kelly green British plaid, worn eccentrically with green animal print tights and gloves. Capes in the brand's trademark animal prints were cinched in the front, with fringe trailing along the runway.

Handcrafted leather florets that graced shoes and dresses were inspired by Capodimonte porcelain.

"We are coming out of a very sad period of isolation, and this woman wants to have fun,'' Puglisi added.

Alessandro Dell'Acqua's collection for next season provides seamless transitions from womenswear to menswear, showing just how linked they are at his No. 21 label.

The women's silhouette is defined by the corset shape, tightening the waist and giving shape to outerwear, as well as dresses and jumpers.

Meanwhile, skirts appeared to be made from men's trousers, creating a pair of zip-modulated sexy slits.

An upcycled fur coat got a new life with a black tulle overlay to create a unique piece. Men's overcoats were otherwise oversized and military in cut; and long thick-pleated skirts substituted for trousers, worn with a Hawaiian print shirt with couture detailing.

"What I cared about most was updating the language in order to obtain female and male figures that best reflect the times, which while imprecise are still forming,'' says Dell'Acqua.

The second class of the We are Made in Italy campaign to promote designers of colour showed their winter collections next to iconic examples of Italian design in the ADI Design museum.

Fallylah Nyny Ryke Goungou imbued her Nyny Ryke brand with a burst of colour, combining west African woven textiles from her native Togo with sexy mesh and yarn macrame accents for looks that suit any Gen-Z and Millennials alike.

"I have been really explosive this year!" Goungou exclaimed at her stand near a red Ferrari.

Romy Calzado's fitted dress of patchwork jersey had a soft camouflage vibe brought to life with strong shoulders, and Judith Borsetto created for her Saint Jermain label boots with a long pointed toe to recall the famous Plague Doctor Venetian mask set off by her trademark embroidery details.

"These five incredible women designers have grown so much,'' said Michelle Ngonmo, one of the creative forces behind the campaign and the founder of Afro Fashion Week Milan. "I think it is a good start and that the fashion industry in Italy is really starting to see that POC creativity is part of the Italian fashion industry."