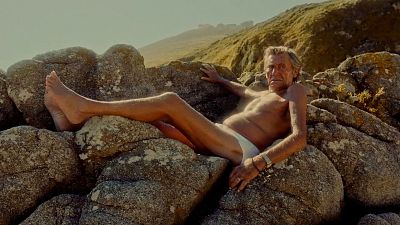 To celebrate his 90th birthday, self-proclaimed ‘Spanish King’ and newfound fashion model Andrés García-Carro held a party in a Madrid nightclub for 250 people.

Packed with models, actors, film directors and musicians, the private event that was official proclamation of the new king of the Spanish fashion industry.

And despite his age, his courtiers believe his reign is far from fading.

Two years ago, García-Carro was living a quiet life as a pensioner, in a country house in the Northern province of A Coruña, without a photo shoot or editorial campaign in sight.

García-Carro's found his renewed purpose close to home – his model potential was ‘discovered’ by his granddaughter, 27-year-old Celine Van Heel, during the early months of COVID-19 lockdowns.

“He was my first subject, my first muse. I discovered photography thanks to him,” says 27-year old Celine Van Heel.

She now manages the Spanish King’s career as her own fashion photography flourishes.

'A fun, creative and free spirit'

With a distinctive tan and long silver hair, his leopard print speedos and his fur coats, 'The Spanish King' is often portrayed as a ‘bon vivant'.

His outfits take us back to the Golden Age of the Costa del Sol when Spain opened to international tourism in the late sixties. Sometimes it resembles a grownup Alain Delon, brought back from the film ‘Nouvelle Vague’, with a hint of Iberian flair.

“It was actually during COVID times that I was with him in quarantine and I just decided to grab a camera and start to take pictures of him," Van Heel tells Euronews Culture.

The pictures were welcomed with excitement at French fashion magazine L’Officiel, so Van Heel decided to put together a portfolio with more pictures and create a whole new character – 'The Spanish King', a personality that would fit her grandfather; a fun, creative and free spirit.

Since then he’s been featured in Vogue, GQ and Esquire, and has worked with fashion brands like Zara and Carolina Herrera.

But that's just the tip of the iceberg. García-Carro has taken up on screen work in films, music videos, even the Spanish version of cooking show 'Master Chef'.

Some would even consider him an influencer of sorts. His follower count of over 40,000 – the majority of which appear to be millennial and Gen Z admirers – definitely suggests so.

Who was Andrés García-Carro before 'The Spanish King?

Don't be mistaken – 'The Spanish King' lived a full and varied life a long time before this chapter.

He studied in London and Paris, worked as a ‘Gaucho’ driving cattle on his horse in Argentina and owned a restaurant in Uruguay’s Punta del Este and many other businesses in Spain, until he landed his late job as a model and influencer.

“I always knew he was something special," explains Van Heel.

"He’s not a normal grandfather. Since I was small I remember him being always smartly dressed. He loves getting tanned, he is constantly getting a tan, even in the winter. It just popped in my mind one day when I picked up the camera. I thought – let's do something about it. Let’s take pictures, let’s do film. Let’s dress him extravagantly, tell a story, and let people have a good time”.

But the Spanish King’s lookbook is diverse, as Celine Van Heel continues to develop the alter-ego she created with her grandpa.

“There’s not an exact style for my grandfather. The most important thing for me is to catch attention, presenting him as elegant, but fun. A bit of a twisted, pop personage."

One day he can resemble a Hugh Hefner of sorts, but on another you'll find him dressed in sportswear, or delicate Yves Saint Laurent shirt.

Despite the age difference, the Spanish King has connected with a large youthful audience who follow him on Instagram.

His lack of constraints and body positivity, his thirst for living life to the fullest, and challenging himself without caring what others would think, are all things that have made him stand out in people’s feeds in social media.

“People like things that are different, exciting and new. Who’s ever seen a 90 year old grandpa posing for amazing brands, and sometimes wearing barely anything other than a bathing suit, or going on luxurious vacations?” explains Van Heel.

“What people really like is his free spirit, he doesn't care about anything… His way of living and thinking is contagious. In person he is exactly how you see him on Instagram”.

At this very moment, the Spanish King might be taking a plane to a paradise beach, maybe hitting the nightlife of a European city, or just relaxing in his hotel room waiting to be called for the next photo shoot.

“I can’t say anything yet. It’s the Spanish King’s life and secrets”, she added.

Click on the video above to see 'The Spanish King' in action.