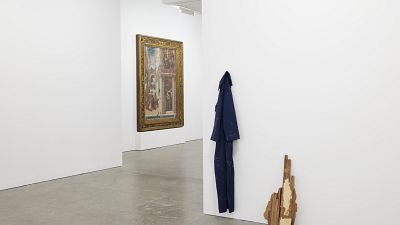 In a seemingly clean white space, an old broom is leant against a wall next to a crumpled, paint-spattered dust cloth. The items contrast with the sumptuous renaissance paintings in gilded frames that adorn the surrounding walls.

Look closer and the broom is inlaid with diamonds while the cloth is delicately embroidered.

Survey two holes in a nearby wall and they’ll be revealed as black diamonds. An adjacent screw is wrought from solid silver.

What appears as abandoned cleaning equipment or unadorned fittings in a gallery space are in fact artworks by Susan Collis.

Collis’ work itself is there filling a gap left by an altogether different artist, painter Carlo Crivelli, a famous trickster and underdog of the Renaissance.

“Susan Collis is asking us what really is valuable? We think this stuff is worthless but when we boil it down the metal value is worth more,” says Jonathan Watkins director of the Ikon Gallery, Birmingham.

“She is raising questions about is it a work of art or isn’t it?

“If it is, it translates into monetary value, but it just looks like an old broom.”

Collis’ unassuming treasures are part of an exhibition on Crivelli called 'Shadows on the Sky'. The exhibit, hosted by Ikon, includes works borrowed from, amongst others, the National Gallery, the Vatican Pinacoteca, and the Victoria & Albert Museum.

The ornate broom and silver screw replaced work that couldn’t be shipped from Italy due to Brexit and the pandemic. They are linked to Crivelli via his employment of trompe-l'œil, a way of tricking the eye as if the viewer were seeing something that isn’t really there.

“You think you know what it is…and then you look twice and a whole other understanding opens up,” says Watkins.

“She’s on the wavelength of Crivelli.”

Crivelli’s trompe-l'œil style knowingly draws the viewer in through creating 3D impressions. In one, ‘The Vision of the Blessed Gabriele’ a bunch of fruit hanging above a monk shows the unreality of a beautifully painted sky, on others, flies appear to be to scale of both the painting and true to life.

All this creates a world in which the viewer is knowingly let in on the painting’s status as both a representation and a thing in itself, a cheeky wink which earned Crivelli a spot in Susan Sontag's 'Notes on Camp'.

Crivelli developed his signature style in the Marche region of Ascoli Piceno where he went in self-imposed exile from Venice following a prison sentence for adultery.

Often overlooked in renaissance histories, one explanation is the focus of early writers on the urban centres of Florence and Venice. He was completely passed over by early art historian Giorgio Vasari when he penned ‘An early history of Lives of the Most Excellent Painters, Sculptors, and Architects,’ in the 16th century.

“He was marginalised quite quickly,” says Watkins, who has been a Crivelli enthusiast since his student days.

“With Art history in general, I think the editing starts pretty early on and people start to repeat the same biases and prejudices.

Crivelli’s outsider status chimes well with the exhibition’s location in a gallery outside of the capital city.

“Because he’s off the beaten track…it makes sense for the exhibition to be in Birmingham rather than London,” Watkins wryly observes.

Crivelli may appear an unusual choice for Ikon, whose brief is to highlight contemporary talent. However, on occasion, the gallery uses classic work to draw in different audiences for their signature exhibitions.

Britta Marakatt-Labba is a Sámi artist whose work is exhibited upstairs from Crivelli and Collis. The pieces by the indigenous artist are an enchanting, multimedia tapestry of political activism and Sámi cosmology.

In one piece, Marakatt-Labba highlights police brutality and Sámi protests against plans by the Norwegian government for a hydropower dam on their sacred land.

On another, the stars and cosmos are represented in fabric, with other works hung on surrounding walls showing the cyclical nature of Sámi beliefs.

A darker theme is that of climate change, which Marakatt-Labba sadly acknowledges is affecting her homeland, with vanishing ice and rapidly changing temperatures (sometimes fluctuating between -45C and 10C) affecting travel and animal populations.

“Sámi culture has survived today because we have never had the word war in our vocabulary, we can solve things without making war,” says the artist.

“We have had that but now we have this, in the future we don’t know how Sámi culture will survive.”

It is a mark of pride for Markatt-Rabba that her work looks beautiful from a distance but carries serious themes close up.

“She really is the freedom fighter for Sami people but she draws you in,” says Watkins.

“There is a drama in revealing something to people. It is like pulling up a curtain and going ta-da!”

But climate change is not the only contemporary theme present at Ikon’s exhibitions.

This subversion of expectations provides a link between Carvelli, Collis and Markatt-Rabba which spans their disparate styles and subject matter and is poignant in an era of fake news.

“What do you know, really?” says Watkins

“It’s interesting in relation to what Putin is doing now,” he adds, in reference to the war of words, disinformation and false narratives surrounding Russia's invasion of Ukraine.

But whether it’s Crivelli balancing (or unbalancing) the line between celestial vision and painting or the extremely valuable everyday items of Collis, both provide a meditation on the nature of reality from politics to the art world which is more relevant now than ever.