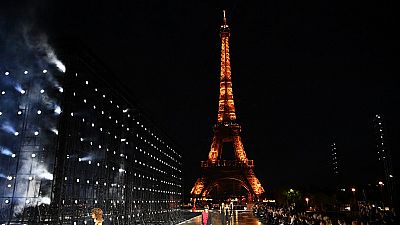 Models presenting creations by Saint Laurent with the Eiffel tower in the background during the Paris Fashion Week on September 28, 2021.   -   Copyright  CHRISTOPHE ARCHAMBAULT / AFP   -
By Josephine Joly  with AFP, AP  •  Updated: 01/10/2021

Paris Fashion Week kicked off on Monday with Saint Laurent hosting a live show at the Trocadero, with a glittering Eiffel Tower as the backdrop.

It began with a frenzy of activity at the houses of Dior, Chanel, Hermes, and Louis Vuitton, as some of the biggest names in couture prepared for the fashion world's most prestigious and important event.

Masks may still be the crucial accessory, but the extravaganza roared back to life with live runway shows after the coronavirus pandemic had reduced it to a virtual stage last time around.

"Fashion is performing, it's performing but the audience is also really important. [A fashion show] it's not something that you can see only in a video. We adapted ourselves to work in a different way, but the real way to work with fashion is to realise a real show," said Dior creative director Maria Grazia Chiuri.

Dior chose the city's iconic Tuileries Gardens to unveil its 2022 spring-summer collection, tapping a 1960s vibe for a sporty, vividly colourful return to the Paris catwalk.

Designers wanted to reflect a world that had learned the value of the exercise and yearned for a bit of playful "joie-de-vivre" over the last 18 months.

"We understood the importance of sport during the pandemic, not just as a performance, but with the idea of feeling good. We were locked up, we had the need to maintain ourselves physically," said Chiuri.

Full of fluorescent greens and oranges, neon blues, and big butterfly prints, the sportswear looks based on jazzed-up boxing and judo outfits were a far cry from the subtle chic with which Dior is typically associated.

The new collection came as a surprise to Dior's artisans. "It's minimalist, very geometric with rigid fabric. There's very little embroidery, compared to our usual work – it's very different," declared Pascal Coppin, head of one of Dior's dress workshops.

"I like it a lot, it's a radical change. It's cool, it's youthful, it's optimistic – we needed the colours to get away from the black and dark blue" he added.

Models eager to be back on the runway

A majority of the 97 houses that registered for the Paris Fashion Week stuck to online presentations for their women's spring-summer 2022 collections.

But Dior, Chanel, Hermes and Louis Vuitton were among the biggest names hosting shows in the flesh.

"We are overjoyed at their return and the presence of other big brands," said Pascal Morand, the head of France's Federation for Haute Couture and Fashion. "We feel this appetite for the physical, for the show."

It follows similar returns at London, Milan and New York fashion weeks this year, after much of the designer world moved online last year due to COVID-19 restrictions, although Dior and Chanel went ahead with a few limited and distanced live shows.

Among the other names to watch are Givenchy and its new artistic director Matthew Williams' first real catwalk presentation, as well as controversial Balenciaga, which recently made waves with its all-black head-to-toe covering worn by Kim Kardashian at the Met Ball in New York.

The house of Saint Laurent also bounced back with a live show, despite being the first major label to quit the Paris Fashion official calendar when the pandemic hit, rebelling against the frenetic pace that had already led several big names to rethink their strategies even before the crisis struck.

Paris Fashion Week will run through until October 5.

Feeling lost? How digital fashion is missing that key element of touch