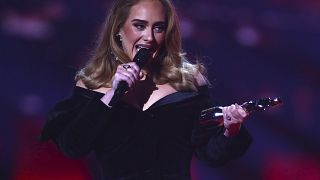 The 41st BRIT Awards kicked off music's award season at London's O2 Arena with Adele picking up three of the four main prizes.

Renowned for being the more chaotic cousin of the US' prim and proper proceedings, the show was filled was performances and honours celebrating the best of British music.

This year's ceremony was a year of firsts: a new host, genderless categories, and first-time performances from the burgeoning talents like Little Simz, Holly Humberstone, and Sam Fender.

Here's what everything that went down that night.

1. A change of host paid off considerably

Until this year's ceremony, the BRITs had held itself hostage to Jack Whitehall's hosting abilities for four years.

It didn't take an expert to see that a change serve the evening well, and it did – there are already calls for his replacement, comedian and Masked Singer judge Mo Gilligan, to return next year.

His jabs at attendees were well-timed and didn't veer into the discomfort of previous shows.

At one point in the ceremony, he asked Prime Minister Boris Johnson to join him for the evening.

"Boris I know you are watching, I know you love a party," he quipped.

"Come on my guy! Come down, man! I know you love your cheeseboard."

2. Upholding a history of unexpected collaborations

The BRITs have an unofficial tradition of concocting weird and wonderful duets.

Whether it's Florence + the Machine and Dizzee Rascal's 2010 face-off or Ru Paul joining Elton John for a peak-camp performance, the result is always memorable.

Ed Sheeran opened the show this year with a performance of megahit 'Bad Habits' unlike any other.

Viewers were bemused when the song took a heavier turn early on as the 30-year-old was joined by rock quintet Bring Me The Horizon.

Lead singer Oli Sykes backed Sheeran with vigour, screaming the vocals to one of the biggest pop songs of last year.

Though it was pleasing to see the out-of-the-box thinking from the show's organisers, the theatrics of the performance – which included hoardes of dancers and stunt performers – fell flat.

What timeline are we living in that I just saw, with my own two eyes, Oli Sykes drop some heavy gutturals over an Ed Sheeran song.

You can just imagine the older generation happily bobbing a long to Ed Sheeran and then having the fright of their lives when Oli Sykes started screaming. #brits

Sheeran also confirmed a new collaboration with Taylor Swift on the red carpet, due to be released this Friday.

Adele was the night's big winner, taking home every award she was nominated for.

The singer's performance of 'Someone Like You' at the BRIT Awards 2011 is widely attributed as the moment that elevated her from a talented vocalist to worldwide superstar.

She performed her song 'I Drink Wine' as a comeback performance earlier in the night.

The BRITs' genderless category switch makes her the first-ever recipient of the 'Best Artist' award.

"I really wasn't expecting this one at all," she announced on stage, having won for both her album '30' and its lead single 'Easy On Me'.

'I want to say a massive congratulations to Little Simz, Dave, Ed [Sheeran], Sam [Fender]. I'm so proud to be in your company. I love being an artist. I can't believe it's my job. England, the UK, we have so many incredible young artists coming up."

4. Who won the genderless categories?

This year's ceremony marked the first time the BRITs has opted to use genderless categories.

The switch up came when three-time Brit winner Sam Smith announced in 2021 that they would not be entering material from their latest album 'Love Goes' on the basis they identify as non-binary.

Host Mo Gilligan joked the move was "great for everyone, except the male artists who realise they’re up against Adele.”

Commentators had expressed fears that this would limit the prospects of female artists. Until Little Mix's historic win last year, the genderless 'Best British Group' award had never been won by a female or female-lead group.

Eurovision winners Måneskin had a hell of a 2021 that culminated in the Brit nomination for Best International Group.

The band found themselves in a cross-generational Eurovision battle as they ended up against BTS, Silk Sonic, the War on Drugs, and ABBA, who as we all know won the competition 48 years ago.

Neither representative of Europe's most beloved annual event ended up walking away with the gong.

Instead, the judges opted for Bruno Mars and Anderson Paak's supergroup Silk Sonic.

But London was treated to a healthy dose of the glam-rock debauchery these Italians have made themselves known for over the past year regardless.

6. Not a dry eye in the house over Little Simz' acceptance speech

Little Simz conquered 2021 with one of the UK's most celebrated albums in 'Sometimes I Might Be Introvert'.

At one point the soulful, reflective work had more five star reviews to know what to do with.

She took home 'Best New Artist' and was joined on stage by her mother for an undeniably moving speech.

"Look what you've done, mum," said Simz on stage as she collected the award.

"I am living proof that if you work hard at something, no matter where you come from, no matter your background and your race, you can do something extraordinary."

Here are the BRIT Awards 2022 winners in full:

Artist of the Year

Songwriter of the Year