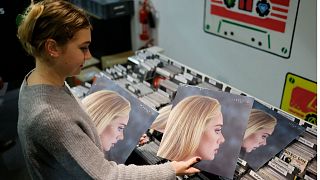 Listening to an album in a shuffled order of its songs has been the 'default' mode for paying Spotify subscribers for quite some time.

It's a model that doesn't work for everyone – streaming culture has, in some ways, prioritised the need for high-frequency individual song releases over entire albums.

Spotify founder Daniel Ek was famously berated last year for suggesting that releasing an album every 3-4 years was no longer enough to do well on the platform.

For stars like Adele and the release of her fourth album, '30', it's evidently more than enough.

The Spotify chief appears to have taken heed of the British singer's desire to stick to the tradition of nurturing an album's original tracklist by making their shuffle mode less accessible.

From this week, a paying Spotify subscriber choosing to listen to any album will be offered a single play mode featuring the album's sequencing as originally intended - not "shuffle" button, characterised by two intersecting arrows.

This was the only request I had in our ever changing industry! We don’t create albums with so much care and thought into our track listing for no reason. Our art tells a story and our stories should be listened to as we intended. Thank you Spotify for listening ?♥️ https://t.co/XWlykhqxAy

Adele, whose latest album is expected to sell half a million units this week, applauded the change.

“It was the only request I had for our ever-changing industry!” she wrote on Twitter.

“We don't put so much care and thought into the tracklist for no reason. Our music tells a story and our stories should be heard as we thought them. Thank you Spotify for listening,” added the British artist , who concludes his message with two emoticons representing a glass of wine and a heart.

Fans were quick to point out that the closing sentence of the statement suggests the singer had been in contact with the streaming giant ahead of the release of '30'.

Ever the musical purist, her fourth album will be her first in six years, with expectations that it'll break global vinyl records due to the dwindling popularity of the CD since her last work, '25'.

The London-born songstress produced '30' to explore life post-divorce from former husband Simon Konecki, as well as using the music to help their son, Angelo, make sense of what happened between his parents as he grows old enough to ask her questions.

"As Adele said, we are happy to announce that we have launched a new Premium service, long demanded by artists and users, which makes the (non-shuffle) the default button on all albums," a Spotify spokesperson confirmed to AFP.

“Those who still want to play an album randomly can go to the + now playing + view and select the shuffle button,” Spotify added.