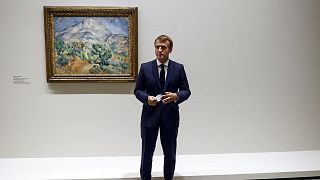 Macron visits a Cézanne painting; the discovery of an early work by the French master is a coup for the art world   -   Copyright  AFP
By Tim Gallagher  with AFP  •  Updated: 01/02/2022

A recently discovered early drawing by Paul Cézanne, thought to have been lost for decades, will be auctioned in March.

Estimated to be worth upwards of €20,000, the pen, brown ink and pencil, drawing depicts a standing soldier wearing a helmet, standing opposite a seated elderly woman.

Historians say the work was created around 1856-1860, when the painter was aged between 17-21, in a  notebook that he then shared with his younger sister, Marie.

The double sided page, which has Cézanne’s work on the back and Marie’s on the front, will be auctioned at Reims, the Ivoire auction house.

Marie Cézanne’s drawing is of a landscape and a horseman in black pencil. The page also features a handwritten inscription by the painter's grandson, Jean-Pierre Cézanne reading: "The drawing opposite is an original drawing by my grandfather."

The original notebook was passed on as an heirloom before being damaged, losing part of his drawings.

It was donated in 1962 to the Bezalel National Museum in Jerusalem – now the Israel Museum – by an American collector, Henry Pearlman. At that time it contained 12 drawings by Cézanne, not including the one to be auctioned.

"We lost track of this drawing after Jean-Pierre Cézanne, perhaps it passed into the hands of Henry Pearlman, without certainty", explains Marc-Henri Tellier, the expert responsible for authenticating the piece.

"We don't know how he got there," says Tellier.

The drawing was then rediscovered a few years ago by auctioneer Thierry Collet during an estate inventory in the South of France.

After a first assessment which did not conclude the drawing was an original, Tellier identified it as such due to important "similarities with other early works of the painter".

He succeeded in "authenticating it with certainty" after two years of research, with the help of the Cézanne company and the art historian Fabienne Ruppen.

"There are a few early drawings by Cézanne in museums. This type of work allows us to see the inspirations of the artist", specifies Tellier.