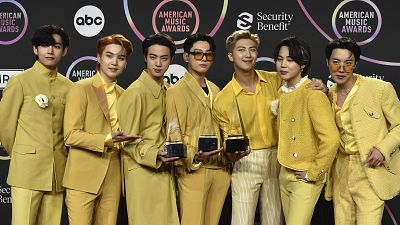 K-pop group BTS have said they are ‘emotional’ about their return to the stage, post-pandemic.

During a press conference in the US, the boyband talked about breaking down cultural barriers and the exhilaration of their first time in front of a live audience after a long break due to COVID-19.

Members of the seven-member K-pop sensation said they feel a “new chapter” is beginning on Sunday afternoon, when the band was set to take the stage at SoFi Stadium in California.

"Seeing the stadium filled with all the fans yesterday got me really emotional beyond words,” said band member, RM.

“It's so touching, and it's really a pleasure for me.”

Fellow band member Jimin said the band had struggled with feeling ‘depressed’ at being unable to meet their fans during the pandemic, but have channelled their feelings into their music.

“We worked hard at this because we wanted to bring healing and consolation to everyone else who are also going through these hard times,” the 26-year-old said.

“Yesterday, being on stage in front of an audience, it made us...feel like we are back where we belong."

The band described an almost-tearful group huddle before going on stage, and expressed gratitude for all the love they have received from fans during the pandemic.

BTS are the most popular of the many K-pops bands riding the so-called ‘Korean wave’; the soft power initiative of the Korean government to make South Korea an influential presence in the world’s music, film and television industries.

The band’s track “Butter” was the first K-pop song to be completely in English, a deliberate effort to cross into what some would call the ‘mainstream’ but others would call the European and North American markets.

“As artists we started out in Korea, the limitations of our identity, language genre and the invisible walls, we felt like they truly existed,” says JM.

“But every moment we tried to give our best to every show, every performance and every music with all of our hearts. And I think those small moments truly made today's miracle for us.”

BTS have proved their global popularity by winning three prizes at the American Music Awards and storming four categories at the MTV EMA’s earlier this year, both sets of awards are voted for by fans. The band’s song “Dynamite” has received one billion streams on Spotify and in May the video for “Butter” broke Youtube’s record for most views in a single day.

The music industry has also recognised them with one nomination at the Grammys ceremony, set to be held later this year.

The band has been vocal in the past about anti-Asian hate during the pandemic, and took the opportunity to again vocalise support for the Asian community.

"As Asians, through the paths used for our path and all over the world, we sometimes truly felt the walls and the walls can't always be described as words... sometimes it's really invisible and sensitive,” says JM.

“All the awards and our music. We just hope that this could truly help every Asian in the world, especially those who live in countries abroad."

BTS is performing for three nights in Inglewood.