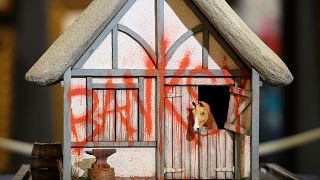 The work, which was discovered in Merrivale Model Village, was anticipated to fetch a high price at auction   -   Copyright  OLI SCARFF/AFP
By Tim Gallagher  •  Updated: 27/01/2022

A secret artwork by British graffiti artist Banksy which the anonymous artist snuck into a model village in the UK has sold for €1.2 million.

The tiny stable, which has the artist's phrase "Go Big or Go Home” sprayed on it, was discovered last August in Merrivale Model Village, Norfolk, and has been described by the owners of the attraction as a “life-saver”.

A sale was confirmed two minutes into the item's auction by a phone-in buyer. The offer, just shy of €1 million, was bolstered by a buyer's premium of 26.4 per cent.

Newcastle-based auction house Anderson & Gowland were in charge of the day's proceedings, selling the model alongside two seperate memorabilia sets dating back to the artist's 'Dismaland' theme park exhibition in 2015.

Original owners Frank and Frances Newsome, who run the model village in Norfolk, UK, described how the artwork went unnoticed for two days before it was pointed out by a visitor.

The disruptive piece is part of Banksy’s “Great British Spraycation”; a set of street artworks along the east coast of the UK that took place in the summer of 2021.

It is believed the artist used diversion tactics (a drone) to evade discovery as he planted the stable in the unsuspecting model village.

The model carries a history shrouded in mystery

Prior to its sale, Merrivale Stable had been on display in Peterborough Museum and Art Gallery as part of an urban art exhibition.

It is said to have gained the museum its most successful Christmas and New year period on record.

The owners of Merrivale Model Village state that they have had to sell the piece due to the costs of ongoing security risks. During its stay at their attraction, the stable was placed in a glass box with extra guards hired.

To this day nobody knows who Banksy is but the artist is well-known for his spray paint murals which are often a savage commentary on society and the absurdity of the art world.

Since gaining prominence in the late 1990s in the UK city of Bristol, the artist has gained wide renown despite their anonymity and sold works for high prices.

In 2018 Banksy sold one of his works “Girl with Balloon” for a record price of over €1 million euros before promptly shredding it via remote control. Three years later in 2021 the shredded work sold for over €21 million.