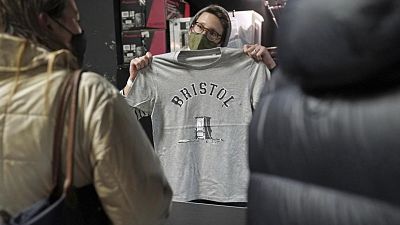 Hundreds of people lined up in the English city of Bristol to get the latest work by elusive street artist Banksy.

This piece is unlike anything the creator has ever released.

The artist – who is a Bristolian himself – has created to help four defendants charged over the toppling of a local statue of a slave trader during the peak of Britain's Black Lives Matter protests in June last year.

The grey shirt features the word Bristol above the empty plinth on which the statue of 17th-century slave merchant Edward Colston long stood, with a rope hanging from it and debris scattered around.

Anti-racism demonstrators pulled down the statue and dumped it in Bristol harbor amid global protests sparked by the police killing of a Black American man, George Floyd.

Those protestors – known to some as the 'Colston Four' – are due to face trial for criminal damage this week.

The design sold out in a matter of hours

“I’ve made some souvenir shirts to mark the occasion,” Banksy said on social media on December 10.

“Available from various outlets in the city from tomorrow. All proceeds to the defendants so they can go for a pint.”

Details of where the clothing would be sold were revealed from 9am on local radio station Ujima.

All t-shirts, priced at £25 (€30) each, were sold out by the end of the day as queues formed several sale points across the city.

Purchases were limited to one per customer. Postings claiming to be the original shirts have appeared on selling sites like eBay for over £9,000 (€10,500).

Where is the Colston statue now?

Local residents had long campaigned for the removal of the Colston tribute due to his active role in the enslavement of over 84,000 Black people.

City authorities fished the Colston statue out of the harbor and say it will be placed in a museum, along with placards from the Black Lives Matter demonstration.

A new statue stands on the empty plinth – 'A Surge of Power (Jen Reid) 202' by Marc Quinn was placed shortly afterwards as a tribute to Jen Reid, a fellow protestor who stood on the plinth after Colston was taken to the river Avon, posing with the Black power fist.

Colston made a fortune transporting enslaved Africans across the Atlantic to the Americas on Bristol-based ships.

He was a major benefactor to Bristol, with streets and institutions named for him — some of which have been renamed since the statue-felling sparked a debate about racism and historical commemoration.

The trial of the 'Colston Four' starts on December 13 and is expected to last 8 days.