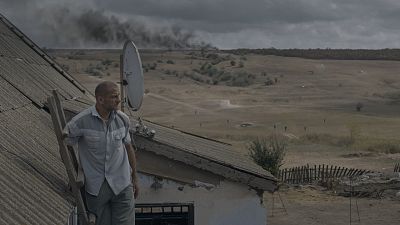 Ukraine is ‘alone’ amidst the threat of Russian invasion, according to the director of a film set in the Donbas region of Ukraine just after Malaysian airline jet MH17 was hit by a Russian missile in July 2014.

Klondike, written and directed by Maryna Er Gorbach, had its world premiere this week at the Sundance Film Festival. Because the event is online, Gorbach is in the Ukrainian capital Kyiv with her film crew, although her home is in Istanbul.

In Klondike, Irika, played by Oxana Cherkashyna, is heavily pregnant and refuses to leave her home on the border of Russia and Ukraine, even after the village is captured by armed forces. She wants to focus on the birth of her baby even as a hole is blown in the side of her house, and she and her husband find themselves at the centre of an international air crash catastrophe.

The events of 2014, including the annexation of Crimea in March 2014 marked the start of conflict with Russia, Gorbach says, and she argues that many Ukrainians thought the MH17 air crash would mark its swift end. 283 passengers, including 80 children, and 15 crew members were onboard the airline flying from Amsterdam to Kuala Lumpur.

“When it happened, I remember that day because it was so unbelievable, and people were saying that this was such an unacceptable event, Europe and the world would not accept this tragedy,” she recalls.

“People were saying this is the last day of war because, for us, it started with Crimea a few months earlier. There was this dream that Europe and the world wouldn’t close its eyes and not see what was happening in Ukraine, they would do something. But now in Ukraine, everything is in our hands.”

Asked whether she feels the country is alone facing Russia, despite the international community’s threat of sanctions against Russia and putting troops in the region, Gorbach replies, “I feel like that.”

We were there at dinner today, eating soup and asking each other what we’ll do if we face a bomb in the house, and talking about whether we have enough petrol to make sure we can get our families out

The feeling that war started nearly eight years ago, Gorbach adds, explains there’s a mood of calm and normality in the Ukrainian capital, despite worldwide political tension.

“It’s not big news for us, you know, although I understand it’s in the media now and it looks like we’re pushing towards bigger events. It’s actually really like what I’ve made in Klondike, it’s this idea of living parallel lives, one of normal life, one including bombing.

“We were there at dinner today, eating soup and asking each other what we’ll do if we face a bomb in the house, and talking about whether we have enough petrol to make sure we can get our families out. But we’ve been in this situation for many years, that’s why we’re talking generally about very daily things, not huge changes.”

But the director admits, like her heroine, Irika, that it’s difficult to imagine the worst until it happens.

“Irika’s a bit of a big head, she doesn’t see the need to escape, she just thinks she can tell troops to get lost if they come to her house, and it’s not until the last moment that she realises that danger is upon her. I think that’s very similar to us, because if someone comes and takes my house, I wouldn’t then be telling you we are trying to be calm. But our humanity tells us to shut down and focus on the small things, to continue life.”

Klondike is dedicated at its end to women, which Gorbach explains is “a sign of a bigger sense of life, because in war it’s not possible to kill everyone, you know? And as a woman gives life, as long as there’s one more woman, it’s still possible to continue life. Irika has an instinct to survive, to have her baby.

Putin’s Russia is also under scrutiny at this year’s Sundance Film Festival with the premiere late last night of Navalny, a fly-on-the-wall documentary by Dan Roher, about jailed opposition leader Alexei Navalny. He was poisoned in August 2020 and claims it was carried out on President Putin’s orders, which the Kremlin has denied. In the film, Navalny makes a prank call to those he believes poisoned him and gets one of them to reveal details about it.

Gorbach says that many, like her, in Ukraine have run out of sympathy that Russia has Putin as a leader.

“For Ukraine, Russia is the country with a national idea to go to war. And there is no longer any sympathy or understanding that they have this government. Because their elections show that they still support their President. That means their national idea is war, because if their national idea was to create, to produce, to grow children, to protest, I don’t know - then he would not be a President. And I would be really happy if people in Russia would be full of desire to change their destiny. Because their President right now is also their destiny, and that’s also very sad.”