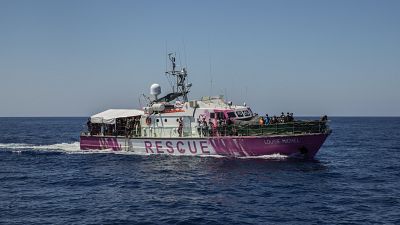 A group of 31 migrants and refugees arrived at Italy's Lampedusa island on Wednesday after being rescued by the Louise Michel, a ship funded by English street artist and activist, Banksy.

They were rescued near an offshore gas platform, 80 nautical miles south of the island, near the coast of Tunisia.

The migrants, who were mainly from Tunisia and Bangladesh, had been sailing on an overcrowded wooden boat.

This was the first landing by a volunteer rescue ship authorised in Lampedusa by Italian authorities in the past three years.

The last arrival of a non-governmental rescue ship at the tiny island was in June 2019, when German captain and activist Carola Rackete docked without authorisation, to allow 42 exhausted, shipwrecked people to disembark after a two-week standoff with the Italian government.

The Louise Michel is a 30-metre-long former French Navy ship, bought with proceeds from the sale of Banksy's artwork.

The renowned artist also decorated the fast ship, which is captained and crewed by a team of rescue professionals from across Europe.