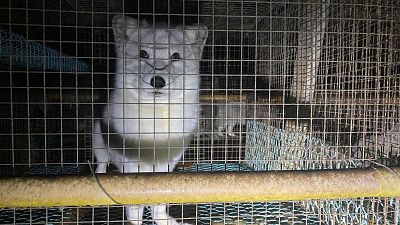 How Finland profits from breeding and killing Arctic foxes for their fur   -   Copyright  Oikeutta Elaimille (Justice for Animals)
By David Mac Dougall  •  Updated: 24/01/2022

For animal lovers, this video is difficult to watch.

Shot in secret in Finland’s western Ostrobothnia region, the footage gives us a troubling glimpse into the conditions of the country's fur farms.

These animals are bred into uncomfortable, unsanitary lives to satisfy a lingering demand for Arctic fox pelts across retail and luxury fashion markets.

The demands of the fashion industry has had the rights of animals in a chokehold for as long as people can remember. But this example is particularly sinister, and Finland is one of the only countries where this sort of fur farming is completely legal.

He visited the farm as part of an undercover operation.

"Many [are] suffering from infected eyes, and other injuries like deformed legs are very common. The animals have been fattened and bred so they grow to a huge size, three or four times their natural size."

Forced into a horrific life and plagued with injuries

British veterinarian Marc Abraham also visited the fur farm undercover, and observed numerous welfare issues: Arctic foxes with overgrown nails; bent wrist joints as the animals try to make themselves less uncomfortable by sitting back on their wrists; and a type of conjunctivitis caused when the excessive skin around the eyes folds in and rubs on their corneas.

“It’s just a miserable, horrific life for animals that are so used to being social and going exploring in the countryside [...] this is absolute exploitation of animals to the millionth degree” says Abraham.

This is absolute exploitation of animals to the millionth degree.

Another serious problem impacting the silver-furred Arctic foxes is boredom.

“The animals simply don’t have anything to do. They are predators who haven’t really been domesticated,” says Justice for Animals’ Kristo Muurimaa.

“They’ve been grown in these conditions for less than a hundred years, so they have all of their natural instincts left,” he notes, adding that in the wild, Arctic foxes roam for huge distances during the winter but in Finland they’re kept in cages smaller than one square metre.

Fifur, the 'Finnish Fur Breeders’ Association' responded by saying that the video was taken illegally by trespassers, and that while there are a few individual foxes with illnesses out of thousands of animals, the activists likely looked specifically for the sickest ones to “create a false image of the fur industry.”

“It is also important to notice that the people involved in the secret filming and trespassing farms at night cause stress and possible disruptive behaviour among animals through their actions” says Fifur veterinarian Johanna Korpela.

“The intruders also cause an acute animal and zoonotic disease risk when trespassing the farms. The activists always violate farm hygiene regulations.”

The Finnish Ministry of Agriculture and Forestry tells Euronews that any suspicion of animal neglect will be investigated, and that in urgent cases direct action can be taken by inspectors to provide veterinary care.

Finland is an outlier in Europe where fur farming still thrives

Fur farming has been banned, made economically untenable through legislation, or is in the process of being phased out in most European countries – which makes Finland stand out even more.

“Finland is a massive outlier for all species, not just fox and raccoon dogs, and they produce about 96% of Fox fur in the EU now,” says Claire Bass, Executive Director of the Humane Society International UK.

Within the European Union 12 member states have a total ban on fur farms; Germany has a de facto ban and zero production due to strict regulations on animal welfare which the industry cannot meet, like requiring swimming areas for mink and digging substrate for foxes.

Denmark, Hungary and Sweden have partial bans in place for a number of species; while Bulgaria, Ireland, Denmark, Latvia, Lithuania and Spain have all either committed to banning fur farming or have begun significant political dialogues about putting a ban in place.

To give it scale: while countries like Denmark or Estonia produce a few thousand fox furs every year, and Poland around 30,000, Finland produced 1.2 million fox pelts during 2020.

So where are these furs ending up? In the wardrobes of wealthy consumers around the globe who value designer labels.

“For fox fur Russia is a big market. We know that a lot end up going to Russian consumers not necessarily being sold in Russia but, bizarrely, Greece is a big market because Greece is a popular holiday destination for more affluent Russians,” says Bass.

“A lot of European fur is still going to China and South Korea as well. And some of it is coming to the UK. You only have to look around the Harrod’s fur department to find lots of proudly proclaimed 'Finnish fox fur' on brands including Moncler, Yves Saint Laurent and Fendi.”

So what is Finland doing about the fur farming industry?

Opinion polls in Finland regularly show that the public does not support fur farming, and would like to see stricter animal welfare rules in place.

Politically however, there is inaction.

Three of the five parties in government are in favour of banning fur farming, bringing Finland into line with most of the European Union, but two government coalition parties still support it because they get a lot of their votes traditionally from championing rural issues, or specifically from the Ostrobothnia region where more than 90 per cent of Finland fur farms are located.

“For me I feel that it’s a huge national shame, because we try to promote ourselves as a country that values human rights and welfare issues, but fur farming is seen as a dark spot in our political talks,” says Mai Kivelä, a member of parliament for the Left Alliance, one of the political parties that make up Finland’s ruling coalition government.

When it happens in your own country it’s harder to see how horrid it is.

Kivelä does however recognise that people depend on fur farming for their livelihood - in fact, less than a thousand full time workers - and that some sort of transition fund could be set up to help farmers find other jobs, or look at alternative ways to make money from their land.

That concept is similar to how the UK approached the problem in 2000 when it was the first EU country to ban fur farming. The government of the day put in so many financial incentives that it became more lucrative to not be a fur farmer, than to try and make a living that way.

“This narrative of a fair and just transition that we’re talking about for the climate crisis, this is a good model of what we could do with fur. We want to ban fur farming, but there needs to be a transition, there needs to be a social programme for the farmers who are losing their livelihood” says Kivelä.

Despite being the EU’s biggest producer of fox furs, the industry is anyway in a long-term decline in Finland.

A decade ago there were more than a thousand farms in the Nordic nation, but today there’s around 700 farms left. Politicians in favour of banning fur farming argue this natural decline could be speeded up if farmers are given compensation.

“People tend to think in our country that we take care of animals, and awful things like fox hunting or bull fighting or whale hunting happen in other places. When it happens in your own country it’s harder to see how horrid it is,” adds Kivelä.

“In the end fur farming will end in Finland, it’s just a matter of time."