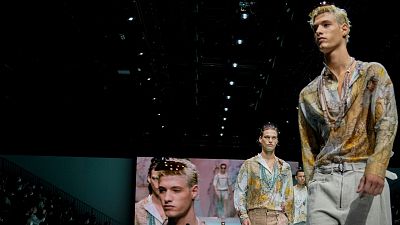 Designer Giorgio Armani is cancelling his Giorgio Armani and Emporio Armani men’s fashion shows in Milan this January because of soaring coronavirus cases in Europe.

His Prive Haute Couture show in Paris will also not go ahead as France faces a 'tidal wave' of COVID cases.

The decision makes Armani the first major designer to pull out of the Milan men’s previews for autumn/winter 2022-23 scheduled for January 14-18.

Merely weeks ago, 22 designers confirmed in-person presentations they felt could go ahead with social distancing and masks.

Just nine brands are opting to present digitally. Vogue magazine has since questioned whether the move is the "first domino" in a series of future fashion cancellations.

In a statement, the fashion house said the decision was “made with great regret and following careful reflection in light of the worsening epidemiological situation.

“As the designer has expressed on many occasions, the shows are crucial and irreplaceable occasions but the health and safety of both employees and the public must once again take priority."

This is not to say every other brand will follow suit – London-based JW Anderson is among six brands that will be making their Milan runway debut and keen to not cancel.

This bout of in-person showcases stemmed from a series of successful displays in September, featuring 40 live runway previews, with mask requirements and limited invitees.

However, Italy, France, Turkey, Russia, Spain, and the UK are among the worst affected countries by the Omicron variant, believed to have arrived in Europe in November.

Armani's cancellation isn't fashion's first big upset of 2022 – The British Fashion Council has said its January menswear shows would not go ahead due to COVID and that they will be merged with the womenswear calendar in February.